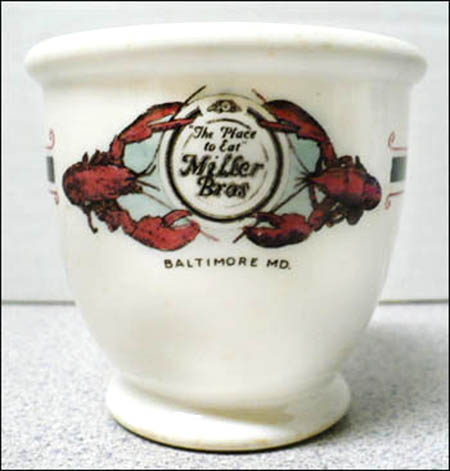 Notes: Brothers Fred and John Miller opened their three-story, 450-seat restaurant in 1913, located at 117-121 W. Fayette St., in Baltimore, Md. Over the years it became one of the best-known restaurants in Baltimore. It closed on June 30, 1963.

The building was torn down and replaced in 1967 with the 24-story Statler Hilton Hotel. Miller Bros.' name and recipes were used for the hotel's dining room from 1967 until June of 1985.

According to the Baltimore Sun's Retro Baltimore, "Things were never the same at the new Miller Bros., which suffered one of those ghastly, lingering restaurant deaths, as it passed from private hands to corporate ones. By the mid-1980s, critic John Dorsey wrote, the restaurant was a 'travesty on the name Miller Bros.'"

The celery dish is crested with two red pink lobsters facing a plate and wine glass. There is a red mid-rim line, flanked by black pin lines with curved or curlicue ends, at the logo.

The eggcup with a slightly different logo and an unmarked back is believed to have been made by D. E. McNicol circa 1920s-30s.