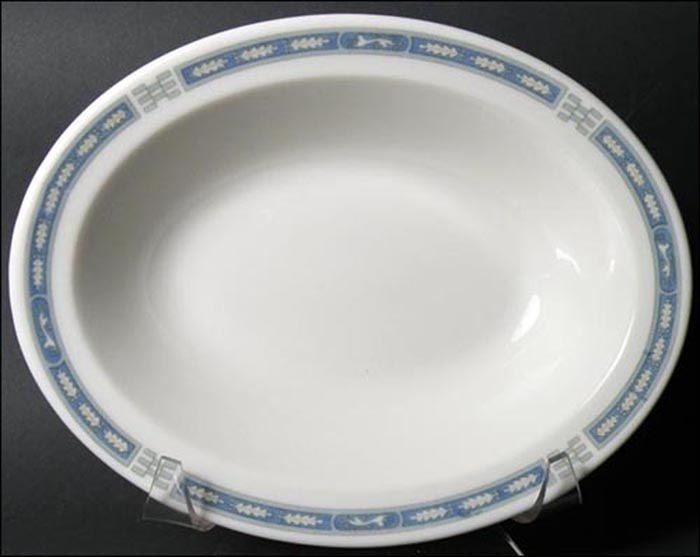 Notes: Mistic is an old, very common Syracuse stock pattern that was produced for many years. It has been seen in shades of green as well as shades of blue, and with or without a line on the outer border. The design was also added to thinner, household ware that can be found with metallic gold decoration.

Of most interest to collectors is that the version shown below of the Mistic pattern (in gray and medium blue and without outer line) was ordered by the Florida East Coast Railway. However, because of the massive amount of this particular version that was also ordered for other venues, it is impossible to tell if any particular piece of Mistic saw railroad use. Most likely it did not.

Versions of this same Mistic pattern have also been found with a Florida East Coast topmark and a Pennsylvania Railroad topmark, according to Richard Luckin in "Dining on Rails."

It should also be mentioned that many other manufacturers made similar versions of this popular pattern. The only version that was ordered by the railroad was made by Syracuse.

The border pattern includes a leaf motif with what is generally considered to be some kind of cat, interrupted by an elongated checkerboard pattern. (In looking at old Syracuse catalogs and backstamps, it is clear that Syracuse used the spelling Mistic and Mystic interchangeably. We are giving preference to the Mistic spelling because that is the one adopted by the authors of the leading books on railroad china and therefore the one now more often used.)