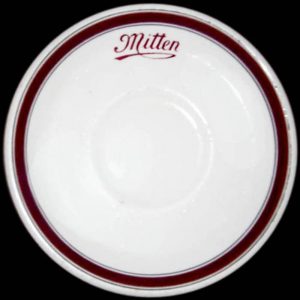 Notes: The Mitten Café and Confectionery was located at 205 Morgan Street in Davenport, Wash. The exact dates when the restaurant was in business as the Mitten are unknown, but the Cyberpedia Library confirms 1930s usage and the location: "During the 1930s, construction of Grand Coulee Dam swelled Davenport's population, as it did those of all communities within the region, attracting both laborers and tourists. Many of these enjoyed the thick milk shakes and other ice cream confections available at Davenport's Mitten Cafe, a small restaurant and candy store where generations of Lincoln County residents and visitors rewarded themselves at the end of a successful trip into town."

An obituary for Margaret L. Leipham indicates that she and her husband Albert operated the Mitten Café from 1935 to 1962. However, an obituary for Beatrice M. Lane might put the date when the Mitten opened a little earlier, in that she graduated from Davenport High School in 1929 and worked at the Mitten after school.

A matchbook for the Mitten Café (in the same burgundy and white as the plate) advertised lunches, dinners and fountain service with the slogan: We make your hunger & thirst a pleasure!"

Thanks to RWCN member Debee for this added information: "The Mitten actually changed to "The Koffee Kup Kitchen." I don't know what year, however my very first job was there for $2.25 an hour in 1975 doing dishes. My mother, who passed away in April this year, was a waitress there for a few years. Jasper Jones was the owner. When they changed the name to The Hanger, she was promoted to bartender and continued to work there for another 11 years. Her name was Beverley Criswell, November 11, 1937 – April 12, 2015."

The plate has a bold burgundy red band mid-rim flanked on either side by black lines. The name The Mitten is in an upright red script with an underline flourish originating from the bottom of the M stroke.

ID and photo contributed by krisbaker