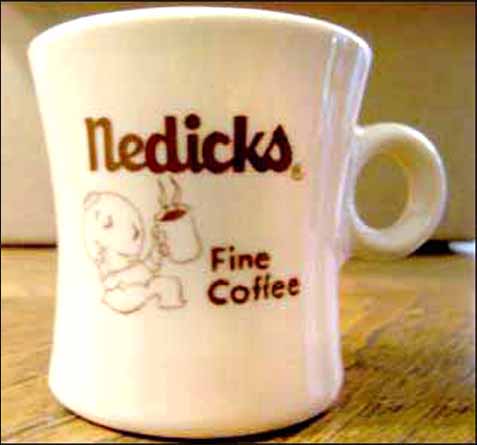 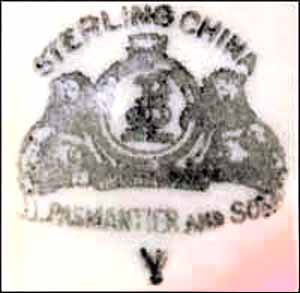 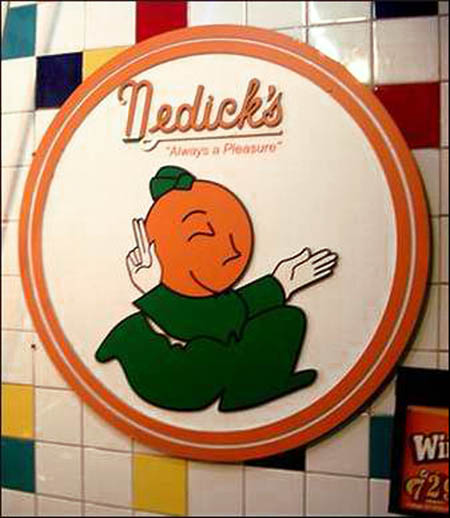 Notes: Robert T. Neely in partnership with Orville A. Dickinson opened Nedick's – a name that combined the first syllables of Neely and Dickinson – in 1913. The original Nedick's was located in the former Bartholdi Hotel building at 23rd Street and Broadway in New York City. By 1928, there were 124 restaurants, including several located inside New York City subway stations.

A popular New York landmark, Nedick's was known for its classic hot dog on a butter-toasted split-top bun and its famous Orange Drink. Nedick's also sponsored the New York Knicks basketball team and its advertising slogan was popularized by Knicks' radio annoucer Marty Glickman, who exclaimed, "Good! Like Nedick's!" after the team scored.

The chain went out of business in the early 1980s, but Riese Restaurants revived the Nedick's brand in 2003 and there are three New York locations as of 2008. (Source: Wikipedia)

Off-white body topmarked in dark brown with Nedick's orange-head guy holding a mug of steaming hot coffee next to the words "Fine Coffee."