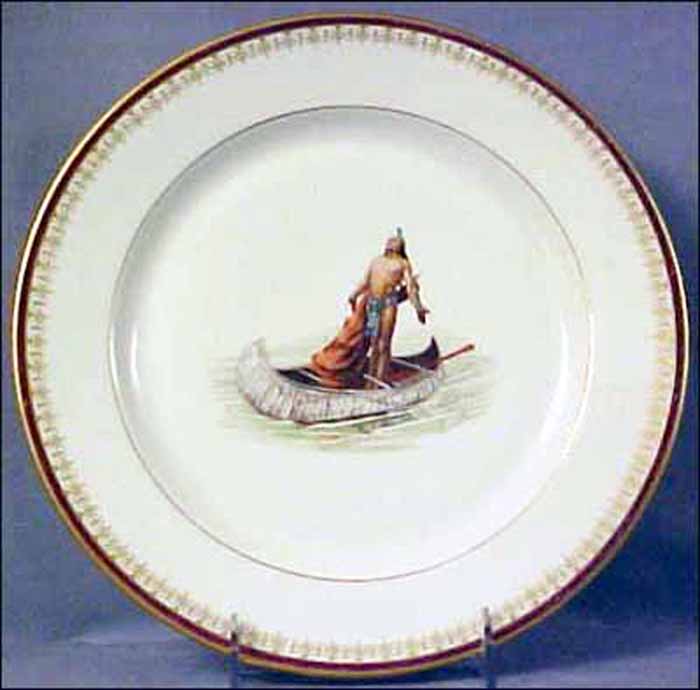 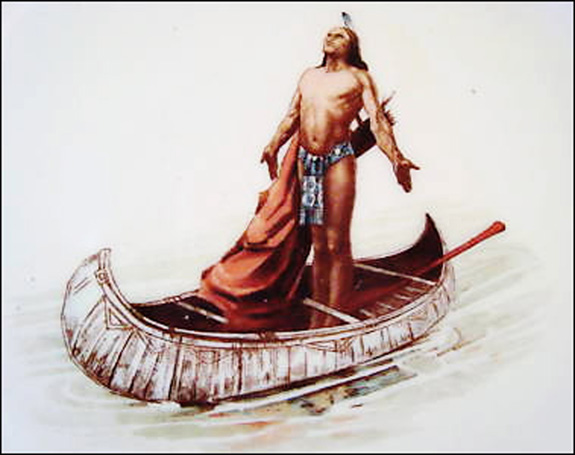 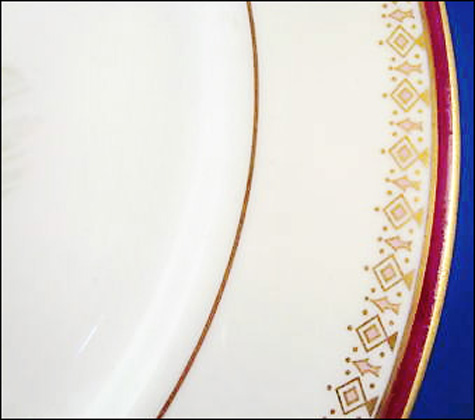 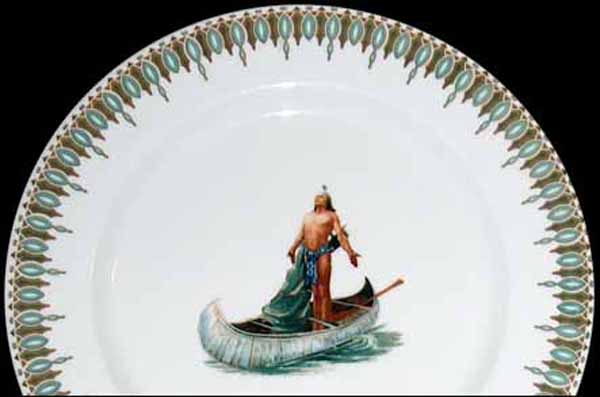 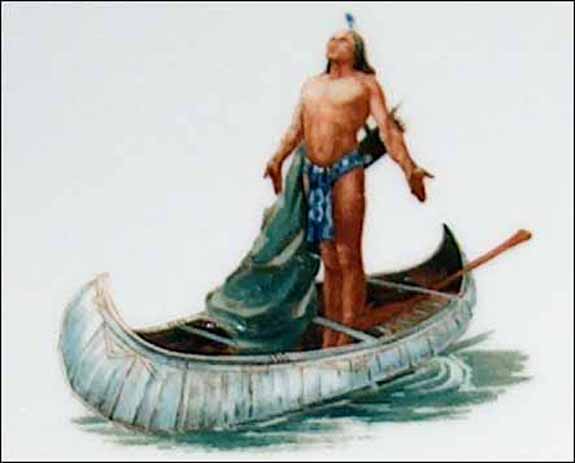 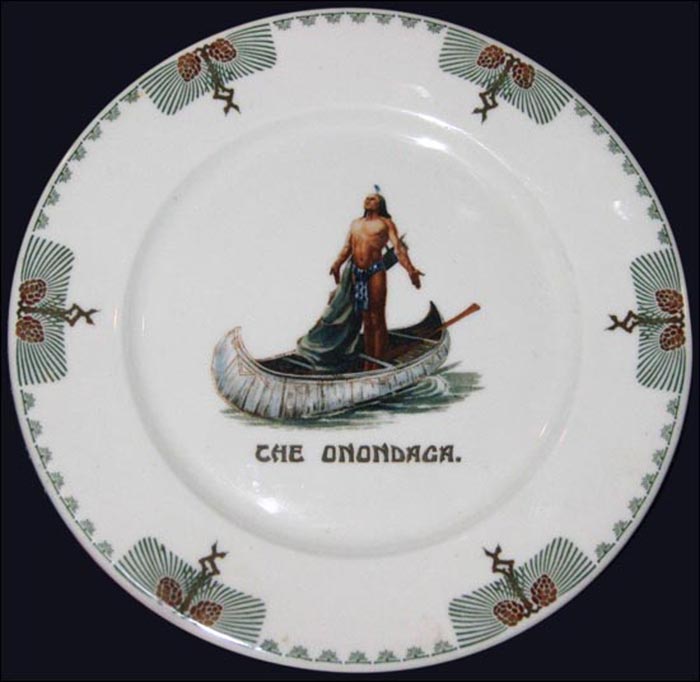 Notes: Above you will find three plates dated either 1909 or 1910, all with Chief Hiawatha standing in a canoe in the center of the plates. It is most likely that each plate was made for the hotel's opening and for a unique venue within the hotel. Information on the plates' borders is provided with the photos.

Information about The Onondaga is based on a March 23, 1969, story by Kenneth F. Sparrow and a June 28, 1970, story by Joseph A. Porcello, both published in the Syracuse Herald Journal.

Among the hotel's amenities were the Louis Room that was next to the ballroom, the Old English Inn that had murals with scenes of medieval chivalry, and a private ladies dining room. The overriding theme at the Onondaga was Hiawatha in his canoe, and wallpaper in the hotel coordinated with that theme, as did, of course, much of the Syracuse china.

The annex also featured The Roof Garden that was intended to be a swank supper club, but because it never really caught on it eventually became a luncheon club and was rented out for private parties.

As Sparrow noted in his story, The Onondaga "was one of the leading hotels in the state in the early decades of the century and the center of Syracuse's social life. People of world renown including Teddy Roosevelt, Al Smith, Franklin D. Roosevelt, Admiral Richard E. Byrd, Herbert Hoover, Jack Dempsey, Babe Ruth, Amelia Earhart, Wiley Post, Irvin S. Cobb, and many others were numbered among its guests in the Onondaga's hey-day."

Like so many downtown American hotels, the Onondaga went through a series of owners and near bankruptcies as suburban motels became popular in mid-century, and it was first slated for demolition in 1961. In spite of attempts to come up with a new business plan – including serving as a residential hotel – it was eventually felled by plans to turn its footprint into a parking garage and office building.

The Onondaga was torn down in stages, with the official closing date set at April 1, 1969, for what remained of the hotel's permanent residents and ground-floor commercial tenants, and as of mid-1970, demolition work was nearing completion. Work apparently began in earnest in March 1970.

In a sentimental story that focused solely on its destruction, Porcello described the methodical way by which the Onondaga was taken apart. "Floor by floor," he wrote, " the old building with its memories is being lowered to the street level for carting off to the rubbish pile or possibly usable scrap heap."

" Elevator shafts and other vertical passages are being used as huge funnels to carry down the bricks, concrete and steel that once was used to erect the proud old building. " Konski engineers, which planned the demolition, and Taroson Construction Co., which is doing the work, have stressed safety of the workmen and the public passing below as the prime consideration in the demolition.

"The workers are all Mohawk Indians, surefooted and without fear in working at the heights over the streets. They walk swiftly along the I-beam edges, as unconcernedly as if they were still treading their native New York forest paths."

The figure standing in the canoe is the legendary Chief Hiawatha, founder of the Five Nations (now Six) Iroquois Confederacy.

PLATE ONE
The border for this design was found in a binder of Syracuse overglazed patterns. It is called Onondaga, overglazed design #60303 in pink and gold. This plate has a 1909 date code.

PLATE TWO
The border for this design was found in a binder of Syracuse underglazed patterns. It is Syracuse Underglaze 61502 Decal – Service Plates Only. This plate has a 1910 date code, and there are subtle differences in the water and the Indian's clothing.

PLATE THREE
The border for this design was found in a binder of Syracuse underglazed patterns. It is called Oregon Pine, underglazed Pattern #59701. This plate has a 1909 date code. The decal appears to be the same colors as Plate Two, but the font used for "The Onondaga." and the pine border make it look like a much more casual pattern.