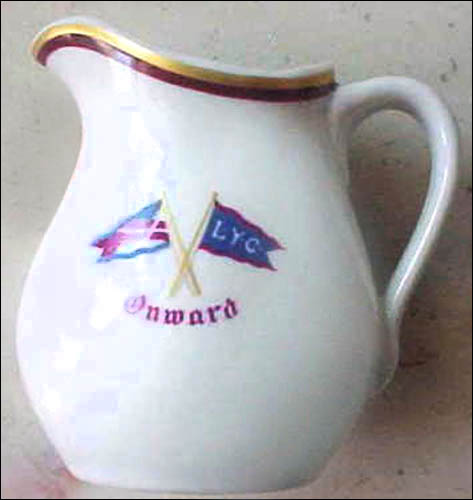 Notes: The private yacht "Onward" was built by Scott Jeremiah Matthews, owner of the Matthews Boat Company, then located in Bascom, Ohio. On November 11, 1905, Scott Matthews, his wife, three children, and his brother-in-law, along with the children's nanny and a small crew, departed Peoria, Illinois on their year-long, 9,000-mile voyage aboard the new 70' Onward. They cruised down the Mississippi River into the Gulf of Mexico, around the southern tip of Florida, then headed north up the east coast to the Erie Canal, which lead them back to Port Clinton, Ohio.

The Mathew family meals aboard the Onward were served on Maddock Lamberton china custom crested with crossed burgees. The burgee on the right has not been identified, the one on the left is for Lakewood Yacht Club in Lakewood, Ohio, where Scott was a member. Curved below the burgees in red Old English-style lettering is "Onward." This crest is a three-color decal in red, blue and gold, applied overglaze, as are the coin gold and red lines at the rim.

The distributor for this china is unknown, but it might have been J. J. Freeman Co. in Toledo, which was founded in 1877. The number of pieces in this china service is also not known, but was probably a dozen of each size plate, cup and saucer, and bowls. With maybe a half dozen of each serving piece including the individual handled creamers. If the meals were served family style, there would have been oval platters for meat and oval bowls for vegetables.