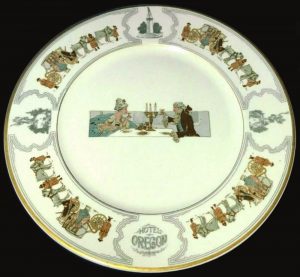 Notes: The Hotel Oregon opened in Portland, Oregon in 1905 at 331 S.W. Broadway & Stark streets. In 1912, Simon Benson, a Portland lumber baron, philanthropist and visionary fulfilled his dream of building a world class hotel in Portland and opened the New Oregon Hotel next door as an annex to the Hotel Oregon. The New Oregon lost money in its first 16 months, so Benson took over the management of the Oregon Hotel and gave it his name (Hotel Benson, known as The Benson). In 1959, the old original Oregon Hotel was demolished, ironically to make way for a 175-room annex to the 1912 building.

White body; the center well is a dining colonial couple; the rim treatment has four coach carriages drawn by four horses with three Portland monuments and at the bottom the name Hotel Oregon.

The monument at the top of the plate is the War Memorial in downtown Portland. The on the right side of the plate is a bronze statue in Washington Park called "Coming of White Man", two Native Americans, one depicting Chief Multnomah facing east along the Oregon Trail. The monument on the left side of the plate is a bronze statue also in Washington Park of Sacajawea holding her son Jean-Baptiste, the famed Shoshone native American woman who guided the Lewis and Clark Expedition through the mountains. It was the first U.S. statue to feature a woman.