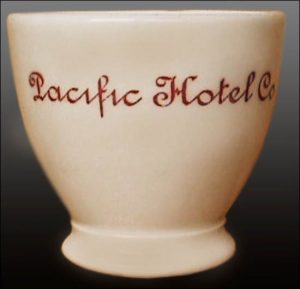 Notes: Pacific Hotel Company took over operation of the hotels and eating houses of the Union Pacific Railway in the late 1800s. Locations along their route included Omaha, Neb., Laramie, Wyo., Council Bluffs, Ia., to name a few. Another of their hotels was the Grand Pacific in Chicago, which was built circa 1873 after the Great Chicago Fire and was the place where Standard Time System was adopted in 1883.