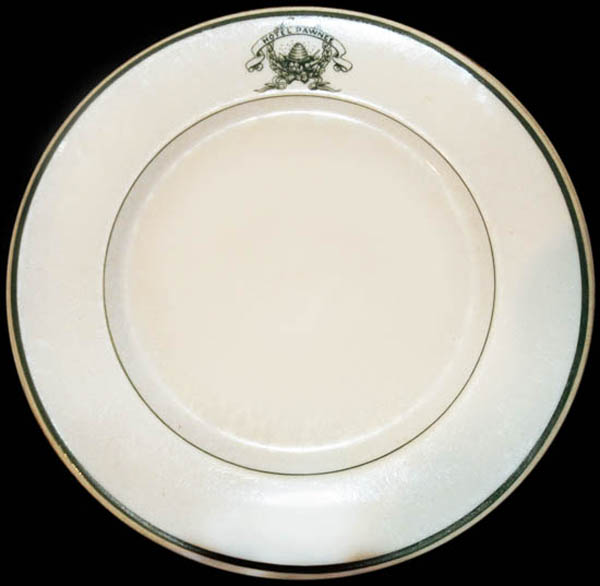 Notes: The 60-room, three-story brick hotel was constructed in 1916 for the Eccles Investment Co. Originally, "Pawnee" was the name selected for this hotel located on Broadway and Pacific Streets, in Blackfoot, Idaho. It may have opened as Pawnee, but by 1923 it had been renamed "Eccles Hotel." The Eccles Hotel Co. also operated hotels in Logan and Ogden, Utah, and in Rexburg, Idaho.

Crested with a gray green transfer illustration of a bee skep basket encircled by a wreath, with a bow and projecting ribbons at the bottom. A banner curves above the bee skep with "Hotel Pawnee." There is a rim line and a pin line at the verge. The Syracuse impressed diamond, with number, backstamp indicates production between 1912 and 1919 (the number is not clear on the known example, but is probably for 1916). By 1923 this china was replaced with the china used in the other Eccles Hotels, which had the same logo except that "Eccles" replaced "Pawnee."