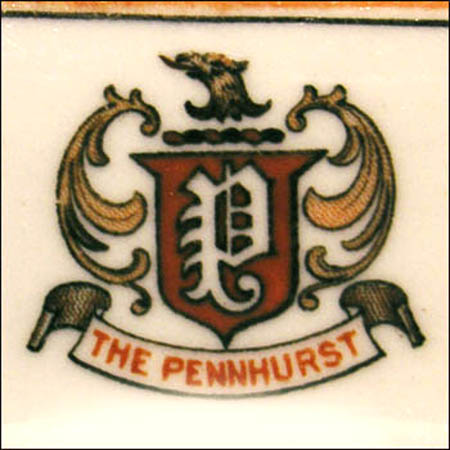 Notes: The three-story clapboard Pennhurst Hotel, located on Michigan Avenue in Atlantic City, New Jersey, opened before 1904. By 1915, it had 100 rooms operating under the American Plan. The 1957 Hotel Red Book (HRB) shows that the hotel had 80 rooms at that time and the hotel was not listed in the 1958 HRB.

Lamberton white body celery topmarked with an underglaze decal shield containing a white upper case, Old English-style "P," against an orange red background. Atop the shield is a torse ribbon bar with animal head. Outlined orange acanthus scrolls flank the sides of the shield. A banner is curved below with "The Pennhurst" in orange red. The rim is decorated with an orange band above a black pin line. Plates have the same border pattern with an added black pin line at the verge.