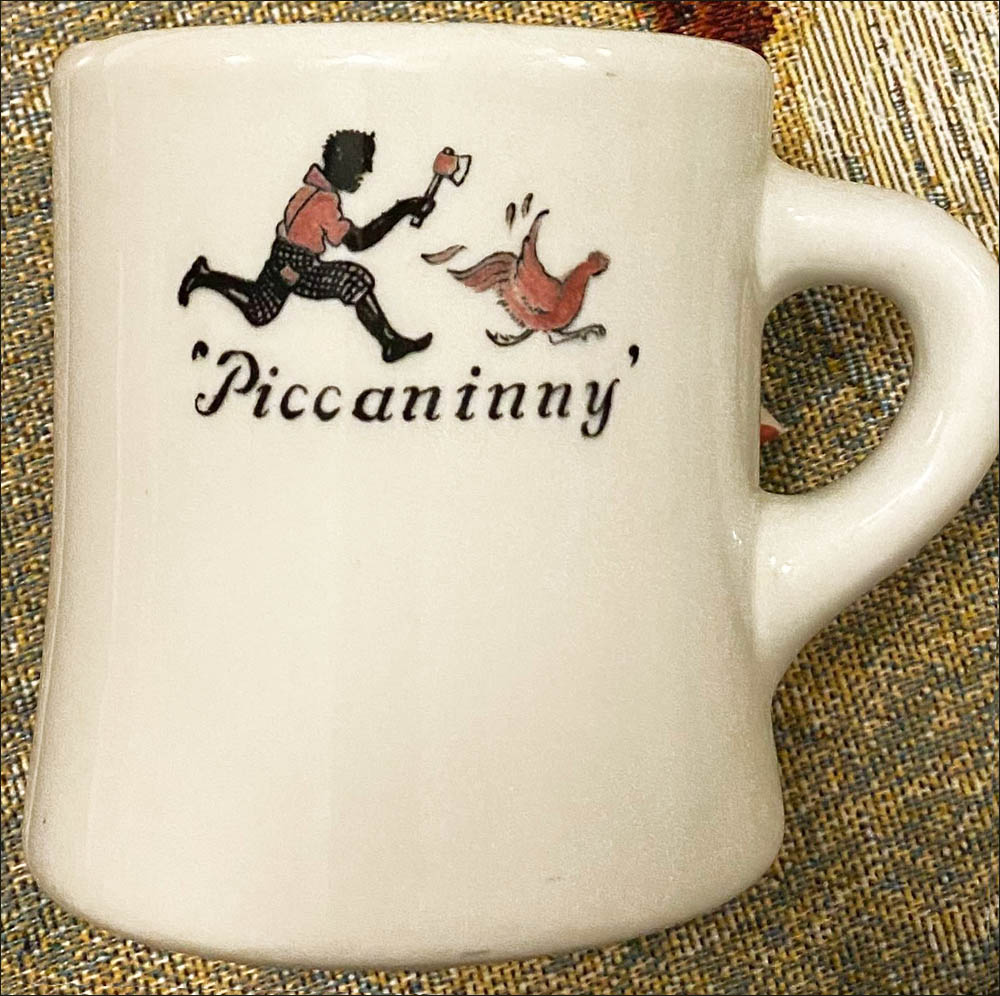 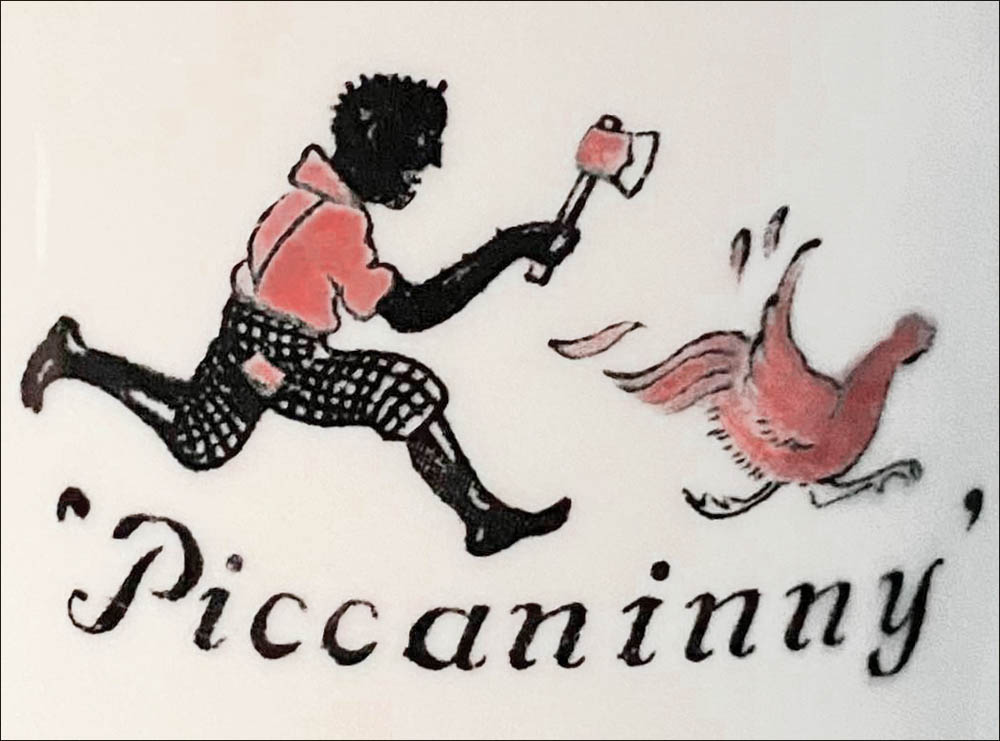 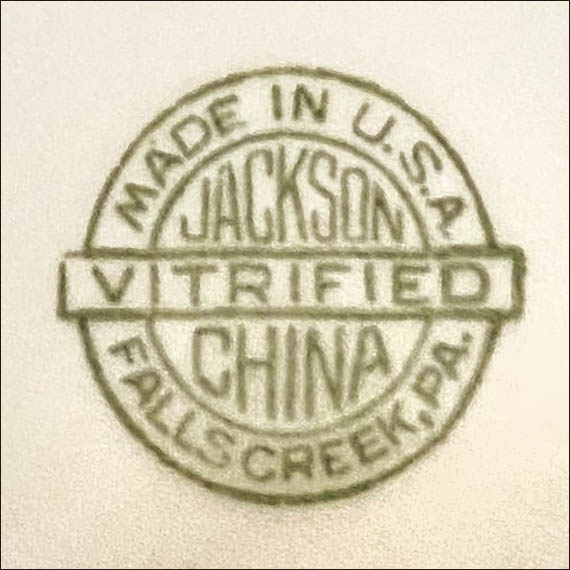 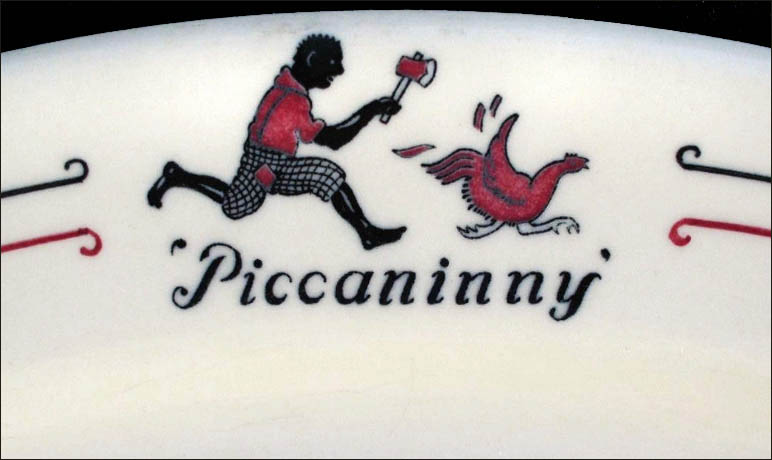 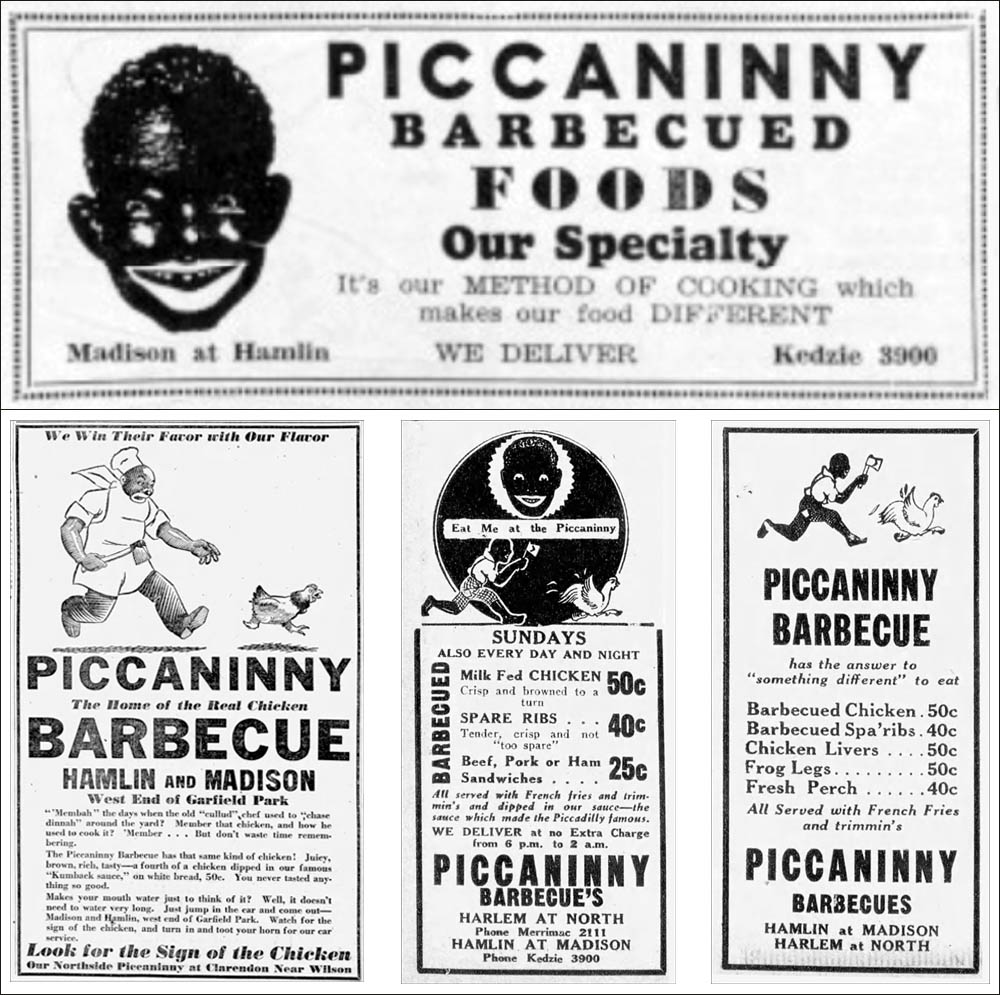 Notes: This mug and platter were used at the Piccaninny Barbecue in Chicago, with several locations variously identified in their ads as being on Madison at Hamlin Street (or Hamlin and Madison or Hamlin at Madison), Harlem at North Street, and on Clarendon near Wilson Street.

The more common depiction for this restaurant in advertising is the black child smiling, but a couple of ads show a chicken on the run from a black person with hatchet, and one in particular combines the two styles leaving no doubt that the ID is correct.

On the flip side of one matchbook is: Old Manhattan, Chicago's Favorite Since 1893 – a beer of the time. Another matchbook shows what seems to be a similar image with: Desautels Piccaninny, Famous for Barbecued Foods, 53rd St. at Blackstone. It is not known what connection Piccaninny Barbecue had with an Old Manhattan restaurant or bar or who Desautels was aside from ostensibly being the barbecue restaurant's owner at one time.

The pattern, with double pinstripe curlicues in Bailey-Walker's version and without in Jackson's version, depicts a black man in patched knee pants with hatchet chasing a chicken. Underneath, with single quotation marks and in a serif font is the word Piccaninny.

Picaninny – one version of the spelling – is described on the Ferris State University Jim Crow Museum website as "the dominant racial caricature of black children for most of this country's history … routinely shown on postcards, posters, and other ephemera being chased or eaten. Picaninnies were portrayed as nameless, shiftless natural buffoons running from alligators and toward fried chicken."

Viewed from the 21st century, these racist images reflect far more on their creators' ignorance than on the perceived inferiority of their subjects. The poster child for this is personified by this ad in the July 19, 1935, Movie News Weekly that has the downright bizarre and utterly senseless tagline, "Eat Me at the Piccaninny."

In addition to what we assume might have been intended to be "Meet Me at the Piccaninny," there are the misplaced apostrophes – including in the actual name of the restaurant – and also the reference to "the sauce which made the Piccadilly famous," in which someone couldn't quite get the restaurant's name correct. Whether committed by the original author, the typesetter or proofreader, it's a safe bet that all of those involved in this failure were white men, confident in their superiority.