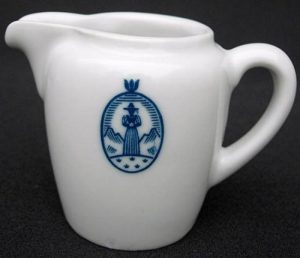 Notes: Located in Obersalzberg, Germany, this resort began as an estate in the late 1800s. It later became the Pension Moritz, named after owner Mauritia "Moritz" Mayer and became known as the Platterhof after Judith Platter, a character supposedly inspired by Mayer in the novel "Zwei Menschen" by Richard Voss.

Adolf Hitler lived close by and it's been said he wrote the first chapter of "Mein Kampf" in the Bavarian Room of the hotel. In 1936 the Nazis took control of the hotel and renovated it, making it one of the most luxurious hotels in Europe. During WWII, it was used as a military hospital. It was heavily damaged and remained vacant until 1952 when the US Army rebuilt and renamed it the General Walker Hotel as part of the Armed Forces Recreation Center. It was returned to German control in 1995, demolished in 2000 and is now a parking lot.

White body, oval with a dark blue line drawing of a woman holding a flower with mountains in the background.

ID and photo contributed by reddygal