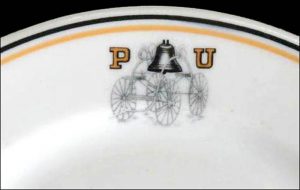 Notes: According to this story in the Purdue University Archives, the bell now known as the Victory Bell was originally located in an "open tower surrounding the combination heating plant and gas making plant" and was used to wake students in the morning and to call them to classes and to chapel. The building was razed in 1903 and the bell was put into storage and eventually "buried deep in a gravel pit." In 1907, it was unearthed and mounted onto a wagon to be rung to celebrate football wins.

Click here to see a photo of Purdue's Victory Bell.

The plate has lines of equal width on the rim in Purdue school colors of old gold and black. Also on the rim is a line drawing of a bell and wagon in gray and black with the initials P and U on either side of the bell in gold outlined in black.