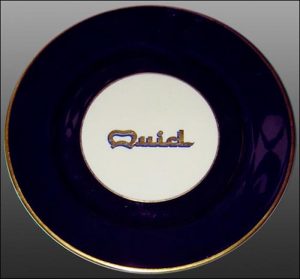 Notes: The Quid restaurant, at 5715 North Milwaukee Ave., in Chicago, opened in 1961 and was run by Edward E. Allegretti. In the style of a Las Vegas supper club, The Quid had a swimming pool for water shows.

A decorated veteran of World War II, during which he was a B-24 bombardier-navigator in the European Theater, Allegretti began his career as a restaurateur in the 1950s. During the 1950s-60s, Allegretti ran The Snug, The Quid and The Cordial Lounge in Chicago, and later a restaurant in the Mart Inn, now the River North Hotel. During the 1970s-early 1980s, he ran The Captain's Table in Waukegan and retired from The Inverness in 1992. He died in 1997 at 75 in Carol Stream, Ill.

It is not known when The Quid closed, but it is believed to have been a relatively short-lived business.

The plate has a wide eggplant band edged with gold and a gold overglazed Quid accented with eggplant in the well. Dated 1961, this is likely from one of the first orders.