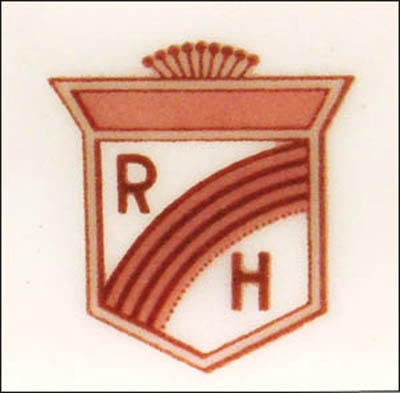 Notes: The five-story, 150-room Rainbow opened in 1911 at 20 Third Street and First Avenue North in Great Falls, Mont. It contained a restaurant, coffee shop and ballroom.

Once called The Jewel of the West, since 1995 the hotel has been an assisted-living facility.

The celery tray is crested with a shield divided by a stylized rainbow arch, with an R in the upper left and an H in the lower right. There is a stylized crown atop the shield. The design is completed by a flanking maroon band and mustard gold rim line. The shield is described in a story on the Great Falls Tribune website.