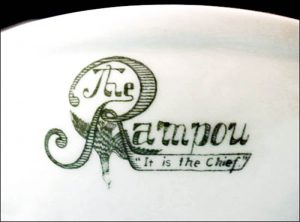 Notes: Edouard Rampou, who was born in Italy, was owner of The Rampou Café in Butte, Montana, at 19 N. Main Street. The July 31, 1921, issue of The Anaconda Standard ran a long story about Rampou, dubbing him a "Swiss Frenchman," … who "enjoys the distinction of having cooked for the presidents of three republics," including serving as "steward for President Teddy Roosevelt at Oyster Bay for seven years." (The story goes on at length to detail the copious amounts of food that Roosevelt was served at each meal, with Rampou commenting: "President Roosevelt was a man of tremendous dynamic energy. … What would have been gluttony in another was merely the necessities for him.")

The story goes on to say, in essence, that Rampou could have chosen any place to cook, but that he "elected to cast his tent in Butte, where he serves the connoisseurs of good things to eat under the sign 'it's the chef' on Main street." This confirms the ID of this piece and also inadvertently points out that the "chief" on this example of his restaurant ware was a typo and should have been "chef." And there's also the possibility that this piece was a sample.

Among the American hotels where Rampou cooked were the Davenport in Spokane; the LaSalle in Chicago; and the Knickerbock in New York City.

A notice in the Feb. 23, 1919 Anaconda Standard commented on Rampou's disappointment at what sounded like a week's delay in opening, so it is likely that the café did open in early 1919.

According to a story in the Jan. 6, 1923, issue of The Anaconda Standard, Rampou was jailed in New York on charges of writing a bad check to his butcher in the amount of $224.73. In the account, it said: "Rampou, who has been one of the leading caterers of the city and who is a chef of reputation, disposed of his restaurant three days ago and left Butte for Europe." … "A few days ago he sold his business to two well-known Butte chefs, who have been residents of this city for many years, giving as a reason that he was anxious to visit Europe for a few months."

The next day The Anaconda – seemingly with little else to report – ran a large ad welcoming the new owners, effective Jan. 1, 1923, noting that the cafe "passed from the ownership of Edward Rampou to new proprietors." (Notice the anglicized spelling at this point of Edouard to Edward.). The new owners were Sam Bergovich and Harry Batakis. Batakis, it was said, had been the chef for Rampou and "was so generally conceded by Mr. Rampou, the former proprietor, that the success of his business was due to Harry's unusual ability as a chef, that the slogan of the place was made 'It's the Chef,'" another indication that the china indeed had a typo.

On April 8, 1924, the café was destroyed by fire and by that August, a local shoe company had built a new location on the site.

The bowl's topmark consists of text on three lines. "The," on the first line, is contained within the bowl of the large "R" that spans the first two lines. "ampou" is on a line by itself, next to the "R," and "It is the chief" is on the third line contained within the tail of the R and forming an underline of "ampou." Also underneath the R is a game bird with head down and wings out asymmetrically. It is all in a deep, dull green.