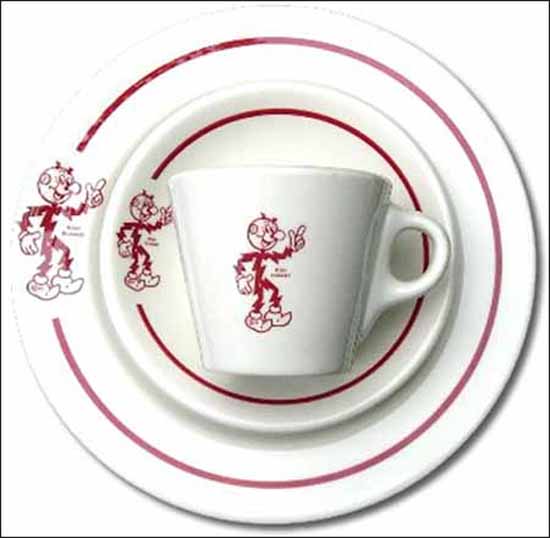 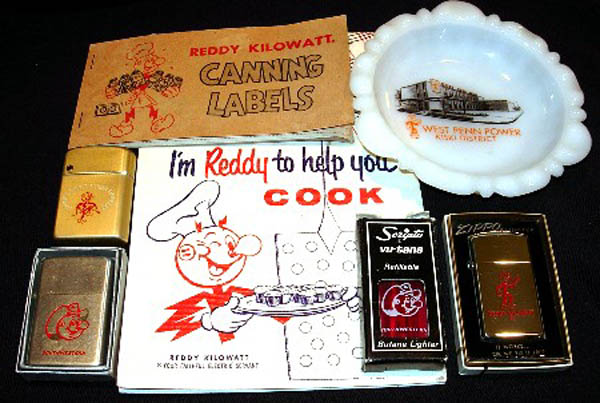 Notes: Reddy Kilowatt was created in 1926 by Ashton B. Collins Sr., a manager at Alabama Power Company. At that time, homes were wired for electricity but not everyone was comfortable with this energy source. As a way of selling electricity as a servant of mankind, Collins came up with his version of what this servant would look like. During a thunderstorm, two bolts of lightning hit the ground at the same time, appearing for a moment like a human figure, and Reddy Kilowatt was born. He was offered to other power companies and over 200 used his image over the years on billboards, promotional items and advertising. He even had his own comic book, "The Mighty Atom," in 1947 as well as appearing in a movie produced at the studio of Walter Lantz, best known for Woody Woodpecker. In 1998, Reddy became the property of Northern States Power Company and is now rarely seen, mostly due to energy conservation efforts.

Reddy faced his first challenger, Willie Wiredhand (Wirehand) of National Rural Electric Cooperative, in 1951. While Reddy Kilowatt had a lightning bolt body, lightbulb nose and wall outlets for ears, Willie Wiredhand had a lamp socket for a head with an electric plug for legs and feet. His creation led to a lawsuit by Collins, who had licensed RK to private power companies and felt electric cooperatives were "socialistic" as they borrowed money from the government and he refused to allow them to use RK.

To make housewives more comfortable with electric kitchens and to wean them away from gas products, many power companies offered cooking classes with rooms stocked with Reddy Kilowatt china. Florida Power & Light, for example, had a meeting room called the Sunshine Room with a kitchen on a dais where a home economist taught classes and served the meals on this china.

Pieces found in this pattern include the dinner and dessert plates, chili, cereal and sauce bowls, cups in two shapes, saucers and the elusive handled cream pitcher. Pieces have a white body with the image of Reddy Kilowatt and most pieces have a matching red stripe.