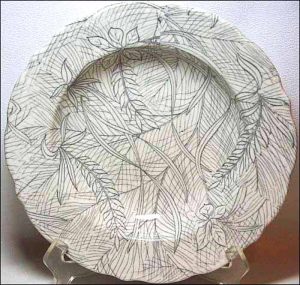 Notes: This was a stock pattern used by the Roger Smith Hotel chain, which opened its first hotel in Stamford, Connecticut on December 29, 1928 (and demolished it 53 years later in 1981).

Under the direction of founder Oscar de Lima, the Roger Smith Hotel chain grew to include eight hotels by 1949, including the Hotel Winthrop and Hotel Park Crescent in New York City.

In 1987, Oscar de Lima's daughter, Suzanne Knowles, inherited the Roger Smith Hotel chain, and by 1994, the hotel chain included 17 hotels in the United States, with the Manhattan hotel at 47th Street and Lexington Avenue being wholly owned by the family.

Considered a boutique hotel in 2009, the Roger Smith Hotel in Midtown Manhattan is home to Lily's Restaurant and has a dedicated art gallery. Paintings, sculptures and other artistic expressions — including the artwork of Suzanne's husband James Knowles — are showcased in the hotel lobby, restaurant and Lab Gallery. The hotel has an obvious "art bias" in the words of co-proprietor and artist James Knowles. Though the modern art bias does not extend to the 130 rooms/suites of the hotel, which are decorated with provencial country wallpaper and furnishings, more typical of a Bed & Breakfast Inn.

Overall leaf and grasses pattern done in gray and white.