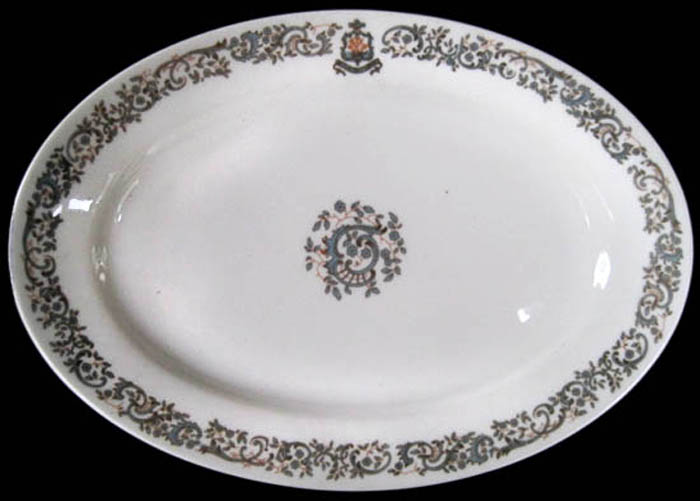 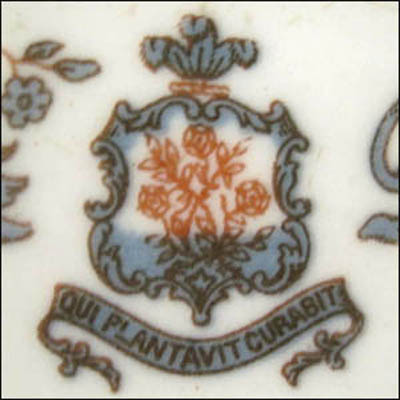 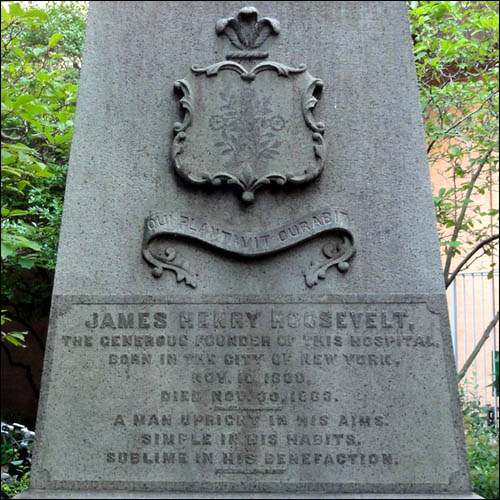 Notes: This border is shown in the Maddock pattern book as #8030 Roosevelt Border. It was probably created around 1912 and produced with a Maddock Lamberton backstamp. The pattern continued to be produced by Scammell with one piece found that contained the backstamped date of 1926.

The 1931 Scammell Lamberton catalog lists Roosevelt Hospital as one of Scammell's customers, but it does not give a location. Roosevelt Hospital, on 59th Street in New York City, is the oldest and largest hospital by that name. It was founded in 1871 by, and named, for James H. Roosevelt, a businessman who donated money for the original building.

As another clue that might point to hospital use: Among the 27 pieces of this pattern that were found in a Long Island home purchased in 1973 was a covered bowl similar to the covered bouillon bowls used for hospital tray service.

Based on all the evidence found so far, it seems very likely that this border and crest were designed and produced for the Roosevelt Hospital in New York City. In addition, the photo shown above of the monument on the hospital grounds honoring Roosevelt seems to bring closure to this ID, including as it does the crest, the quote, and the date of the founding of the institution.

The plate is crested with a gray green shield containing red roses, with three ostrich plumes are atop the shield. Banner curved below with Qui Plantavit Curabit (he who planted will preserve). This crest is a variation on the Roosevelt family coat of arms. The border flanking the crest is composed of gray green acanthus scrolls, flowers and leaves, outlined with thin red lines.