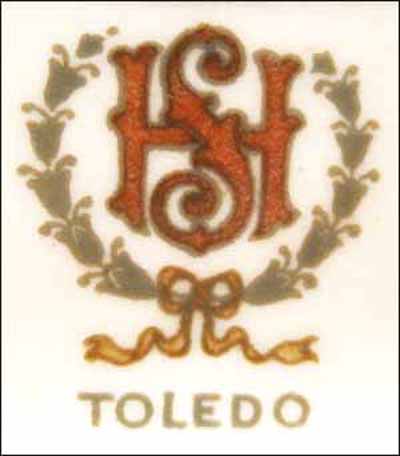 Notes: Located at 425 Jefferson Avenue in Toledo, Ohio, the ten-story, 400-room Secor Hotel opened August 1, 1908, under the management and operation of the Wallick Brothers. The hotel was named after prominent businessman Jay K. Secor, who originally built and owned the building.

The hotel is not listed after 1969 in the Hotel Red Book. According to emporis, the building has been used as a school and commercial space and is still standing.

Lamberton China white body with an orange band and black line on rim. The logo is a wreath of bell flowers with a gold bow, and the initials HS in orange. Toledo is printed under the logo.