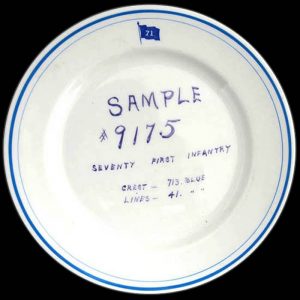 Notes: The 71st New York Infantry was part of the New York National Guard and was originally organized in 1850 as the 71st New York Volunteers. After a former armory burned, a new five-story stone and brick armory, with a 14-story square tower, was built on Park Ave., between 33rd and 34th streets. It opened in 1906. This armory was used until 1971, and later was demolished.

On September 16, 1940, the 71st Infantry was activated into Federal Service in anticipation of the upcoming war in Europe. They arrived in Le Havre, France on February 6, 1945 and participated in the liberation of Gunskirchen Lager concentration camp on May 4, 1945.

White body plate with alternating thick and thin blue (#41) border lines. Topmarked with a blue flag (#713) with the number "71" in white. This is a Syracuse China production sample plate from the collection of Fishs Eddy in New York City. The plate is handmarked on the front: Sample #9175, Seventy First Infantry, Crest – 713 Blue, Lines – 41 " ".