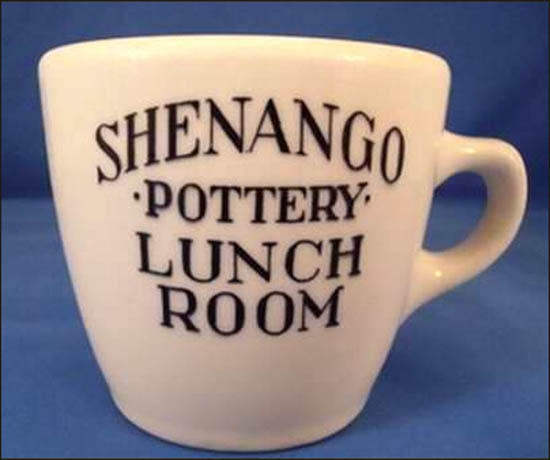 Notes: During its years of production, Shenango was America's largest manufacturer of commercial china. Located in New Castle, Pa., it was in operation from 1901 until 1991.

The tan-bodied cup has Shenango Pottery Lunch Room in all-caps in a black serif font.

1909
Shenango Pottery financial problems continued, but a new group took over, with James M. Smith as president. This resulted in a turnaround after almost nine years of struggle.

1912
Shenango Pottery purchased the New Castle Plant and moved to that location.

1913
The new plant flooded before production could start after refurbishing the new location, slowing down the growth.

James Smith proved to be a determined leader and businessman, and the plant slowly flourished.

1939
They were commisioned by Rosenthal China of Germany to produce Rosenthal shapes and patterns under the name "Castleton China." Shenango invested $25,000.

1951
Shenango Pottery purchased all the stock of the Castleton China Co. from Rosenthal.

1953
A design was commissioned in honor of President Eisenhower's "first birthday" in the White House for a celebration hosted by the Republican Party in Hershey, Pa., and given as gifts to those attending.

1954
Shenango Pottery changed the name back to Shenango China, Inc.

1955
Castleton was commissioned by First Lady Mamie Eisenhower to create the formal china for the White House State Dining Room.

1959
By 1959, Sobiloff Brothers had purchased all the stock from the Smith estate and other stock holders.

1961
All assets of Shenango China were transfered to Shenango Ceramics, owned by the Sobiloffs.

1968
A set of Castleton was commisioned for the Johnson administration to present to the White House as a state service china.

The assets of Shenango Ceramics, Castleton China and Mayer China were sold to Interpace Corporation, manufacturers of Franciscan earthenware and fine china on the West Coast.

1970
Production of Castleton China was stopped.