Manufacturer: Corning
User: The Silent Woman
Date of plate: 1962 – circa 1970s (based on backstamp) 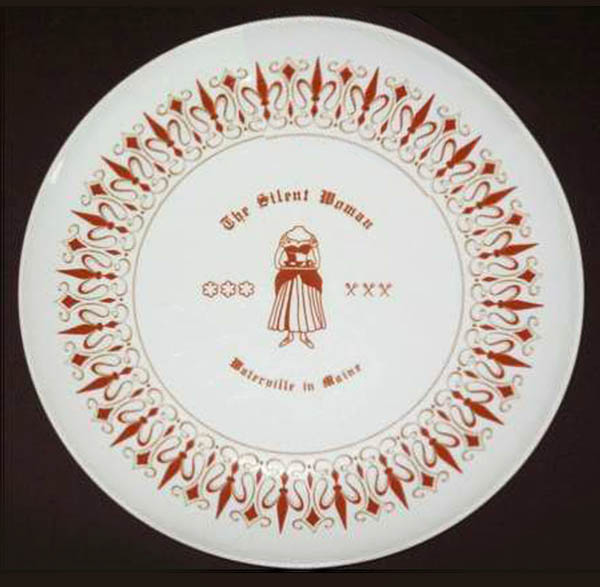 Notes: Located off Route I-95 in Waterville, Maine, The Silent Woman restaurant closed in the mid-1980s, after thirty years of business.

The restaurant logo was a headless woman serving food, as shown on the plate above. The exact origin of the decapitated Silent Woman logo, sometimes called the Good Woman, is unknown. Some say the macabre imagery is rooted in martyrdom, while others contend it is rooted in misogyny. Either way, the imagery of The Silent Woman in Waterville, ME lost its appeal in the 1980s, at a time when the feminist movement was focusing on the inequality of laws, as well as cultural inequalities.

The following information appeared on the back of The Silent Woman menu:
"A Silent Woman-how can that be? Patient Traveler, do not scoff: Drawn from the very life is she and mute, because her head is off. The name actually came from an old English pub. The custom of hanging a sign to attract trade goes back to the early Middle Ages, when only the scholars could read. The tailor displayed a sign with a pair of shears, the hosier, a stocking, the inn or tavern, a jug or bottle. The hosts of some of the inns preferred more original signs, such as The Pig and Whistle, The Mermaid Tavern, The Red Lion, The White Horse, The Bulls Head to name a few.

The Silent Woman can be found, surprisingly, by a similar name in France, Great Britain, Belgium and Holland. In England, it is thought that the sign evolved as a satire on Henry the Eighth's method of divorce. Thomas Hardy refers to a Quiet Woman Tavern in The Return of the Native; and as recently as 1761, there was a Silent Woman Tavern in Massachusetts. The sign probably originated in France as La Bonne Fame, meaning "Good Fame". The poet Virgil said: "Fame walks the earth, holding her head in the clouds." It may be guessed that it was changed from Fame to Femme…The Silent Woman was first started as a small steak house and grew as a large fine food restaurant." (Source: mendoggie1)