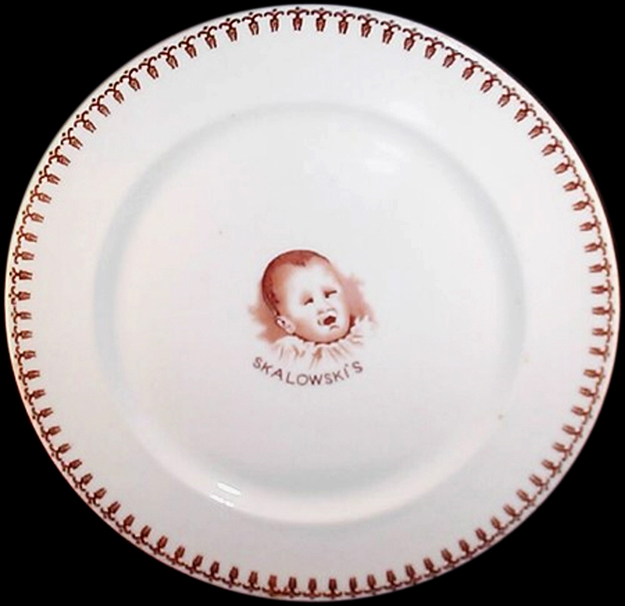 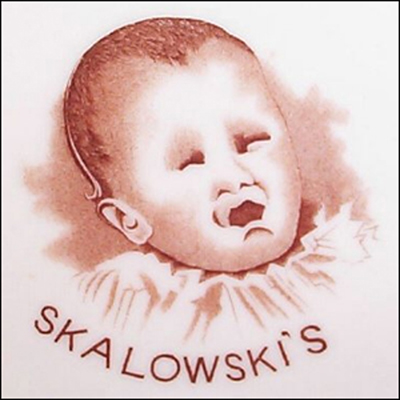 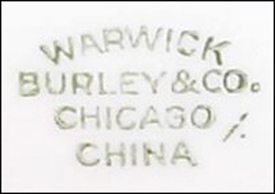 Notes: Skalowski's was located at 217 Fifth Avenue North in Nashville, Tenn. It was owned and operated by Maurice H. Skalowski, according to the Tennessee State Library and Archives, which referred to Skalowski's as "America's Handsomest Confectionary Parlor."

Date of the plate is in question. Its Warwick backstamp would put it between 1912 and 1920 according to Restaurant China Volume 2.

Click here to see the cover of "Meet Me at Skalowski's."

The Tennessee archives guesses that the music dates to 1909. It was written and published by Lew Roberts of Nashville, and 1908-09 seems to be the range in which most of Roberts' music was released.

Date of the plate is therefore estimated to be 1912. If the Warwick backstamp is found to represent an earlier time frame, the plate's date could then be adjusted.

Burley & Co. operated within a wider span and so is of no help in dating the piece.

According to the archives, Skalowski "provided scenes from his establishment on the reverse cover [of the music] to encourage patrons to visit." One is left to wonder if Skalowski and Roberts were friends, and the song – and especially its not-so-melodic title – were released as an advertising ploy.

Prior to ownership by Skalowski's, the location was owned by Charles G. Guth and called Guth's. Guth was an entrepreneur in the soft drink and confectionary businesses. He went on to join Loft Inc., a chain of confectionary stores, and is most noted by his purchase in 1931 of Pepsi-Cola.