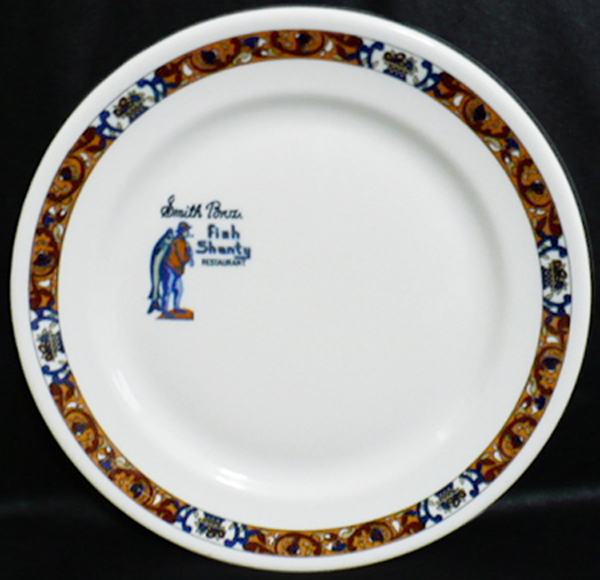 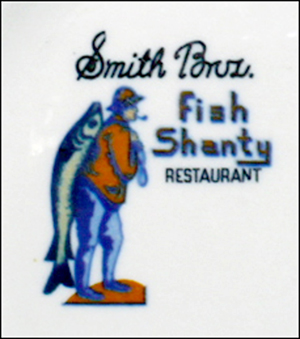 Notes: Founded in 1848, the Smith Brothers Fisheries of Port Washington, Wisconsin was a midwest family-run business started by Gilbert Smith. The business started from a simple fishing operation and then grew into a conglomerate of small businesses, which included a fishing tug known as the Oliver H. Smith, trendy Fish Market restaurants in Los Angeles, and its flagship restaurant and Fish Market in Port Washington. The company also created Fish Day, the world's largest one day Fish Fry, which is held the second weekend in July every summer.

The logo used by the Smith Bros. was a stylized font, based on Delos Smith's signature, along with an image of a cartoon fisherman carrying a large fish on his back. Apparently, there really was a guy living in Port Washington, who unwittingly posed for a portrait carrying a sturgeon. The "fisherman" in the logo was not however, a Smith: he was an employee of the Smiths. There is a statue, based on the same fisherman, known as the "Fisherman's Statue" in "Rotary Park" in Port Washington. This statue has a plaque that lists the names of all the known commercial fishermen from Port Washington, including many a Smith.

White RimRol body with mid-rim border featuring multi-colored scrolls and baskets of flowers in shades of red and blue on a dark-orange band. Topmarked left with the Smith Bros. logo of a cartoon fisherman carrying a large fish on his back and "Smith. Bros. Fish Shanty Restaurant" in dark blue lettering.