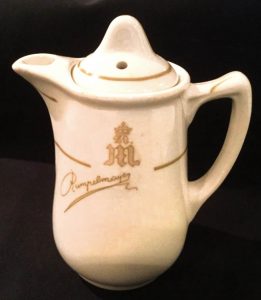 Notes: Located at 50 Central Park South in New York City, the original 1000-room St. Moritz Hotel designed by architect Emery Roth opened its doors in 1930. It was the home of the Sky Garden for dinner and dancing, and Rumpelmayer's for luncheon, tea and delightful deserts. It later added the Cafe de la Paix and Harry's New York Bar.

In 1985, Donald Trump bought the St. Moritz for $72 million from a syndicate led by Harry B. Helmsley and later sold it in 1988 for $180 million to Alan Bond, an Australian entrepreneur. Bond eventually turned over the St. Moritz to his lender, F.A.I. Insurances, which managed the hotel through 1996.

Failing in its efforts to sell the hotel and recover its $195 million investment, F.A.I. made a deal with Trump in 1997 to strip the St. Moritz to its steel skeleton and build condominiums under a bronze-tinted glass exterior. Trump, however, lost a bidding war on the St. Moritz Hotel to boutique hotelier Ian Schrager – the former partner of Steve Rubell in Studio 54, the legendary New York disco of the late 1970s and early 1980s.

In January 2000, Millennium Partners and Ian Schrager Hotels settled on a joint venture to turn the St. Moritz Hotel into a luxury property to be managed by Ritz-Canton. The building was gutted and underwent a comprehensive renovation that reduced the overall room count to 277 and transformed the property into a flagship addition to the Ritz-Carlton chain. In May 2002, the St. Moritz hotel was rechristened the Ritz-Carlton New York, Central Park.

White body, double topmarked with the St. Mortiz and Rumpelmayer logos and a line border in a dark mustard color.