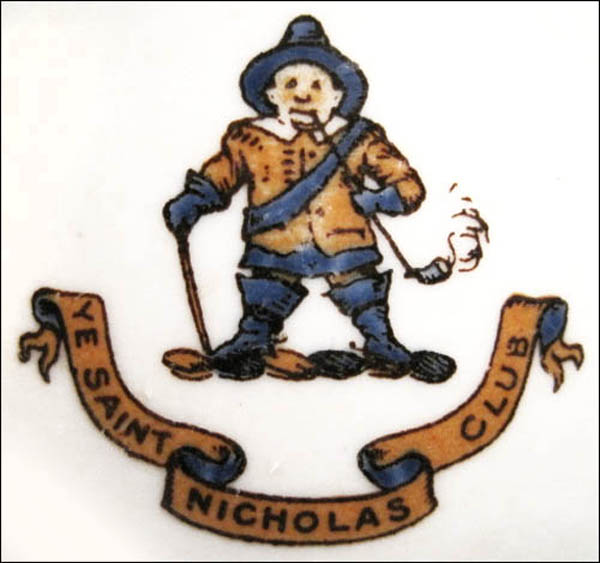 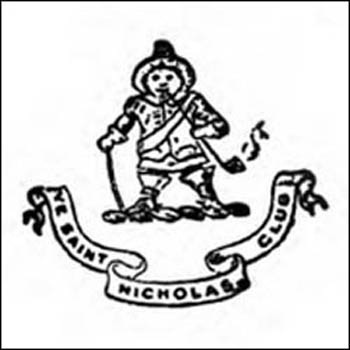 Notes: The location for this pattern was identified thanks to the Constitution, By-Laws, Officers and Members of the St. Nicholas Club of the City of New York, 1902 – a book digitized by Google and originally "printed by order of the club."

According to OldPokerChips.com, which includes a page devoted to the St. Nicholas Club – and its poker chips – clips of newspaper articles (ostensibly from The New York Times) indicate that the club was founded in 1875, with its first clubhouse at 7 West 44th Street in New York City. Among its founders was Cornelius Vanderbilt.

Its constitution was adopted June 22, 1892, with the purpose to "collect and preserve information respecting the early history and settlement of the City and State of New York, and to promote social intercourse among its members."

Among the interesting house rules were the stated hours of the club house, from 7 a.m. to 1 a.m.; that "Crockery, glassware, furniture, or other property of the club, broken or injured by a member, must be paid for by him at the time"; and that dogs were not allowed within the club house. In addition, much attention was paid to the games permitted within the club, including whist, euchre, cribbage, billiards, chess, checkers, backgammon and dominos (as well as other truly arcane games) – and that "members shall not have at stake, directly or indirectly, any sum greater than five dollars on the result of any game."

Nowhere did the house rules address the question of women, either as members or guests, but it is clear from the membership rolls that women were not allowed to be members.

This design, placed on a cream pitcher, would have been ordered for the move to the 51st Street location. While it appears to depict at first glance an Irishman holding a cane and smoking a pipe, because membership required a genealogy that went back to Colonial New York, which was founded by the Dutch, more than likely this character is from the Netherlands. Underneath the man is a ribbon banner with the words: Ye Saint Nicholas Club. Colors used were blue and rust brown.