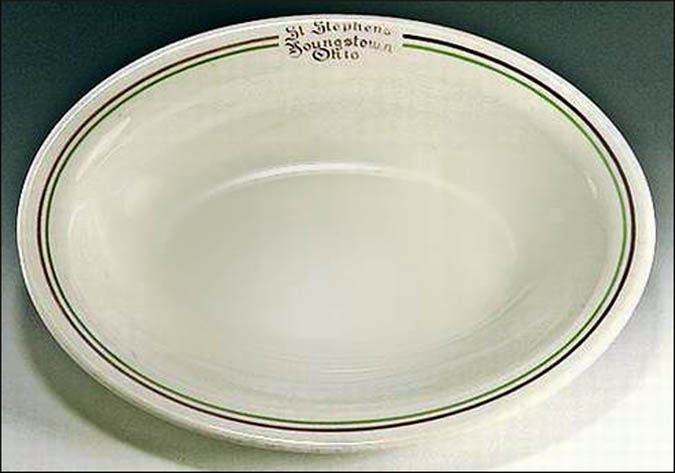 Notes: Believed to have been used by the St. Stephen of Hungary parish located at 854 Wilson Avenue in Youngstown, Ohio.

On August 21, 2005, the St. Stephen of Hungary Parish celebrated its 100th Anniversary, an event covered by Joyce O'Connell from the diocesan newspaper The Catholic Exponent. Below is an excerpt from this article:

"The chronicle of St. Stephen of Hungary Parish began with the first Mass for the Roman Catholic population of Hungarian descent, offered by Father John Kropacs on Nov. 20, 1905, in Temperance Hall on Franklin Avenue. In 1907 Father Joseph Folytan became the first pastor for 120 families. Two years after that the present site of the church and rectory was purchased and the church was dedicated Oct. 30, 1910.

Lots along Rose Street and behind the church were purchased in 1925. In the mid 1930s the structure was lifted and a basement dug. By 1948 it was apparent a new church was needed and a building fund drive was begun. Parishioners broke ground for the new church on April 20, 1952.

The old church was razed in 1956 and a new school erected on the site. Although never used as a parish school, the building has housed religious education classes, The Learning Depot, The English Center (for speakers of other languages), youth ministry programs, child care centers and has been a gathering location for the neighborhood churches…"

Given the 1955 date of this bowl, it likely was used at the new parish, which began construction April 1952. Ivory body with burgundy and green stripes. Topmarked St Stephen's Youngstown Ohio in burgundy.

ID and photos submitted by Donnah