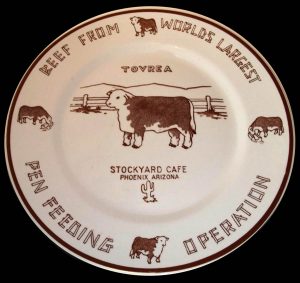 Notes: The Stockyard Café — located at 5001 E. Washington St., Phoenix, AZ — came into being in 1954 when Edward A. Tovrea, a prominent cattleman in the state, opened the restaurant on the grounds of his Phoenix packing house. Tovrea originally opened the stockyards in the Phoenix area in 1919 and enjoyed great success with the operations. Tovrea's Phoenix operations were advertised as being the "World's Largest Feed Lots, Livestock Center of the Southwest".

The restaurant also advertised its specialties as prime ribs and steaks. The café was very unique because it was on the same grounds as the stockyard. As time went on, the cattle business at the stockyards dwindled, however the restaurant continued in popularity to where today (2008) it is still Phoenix's premier steakhouse.