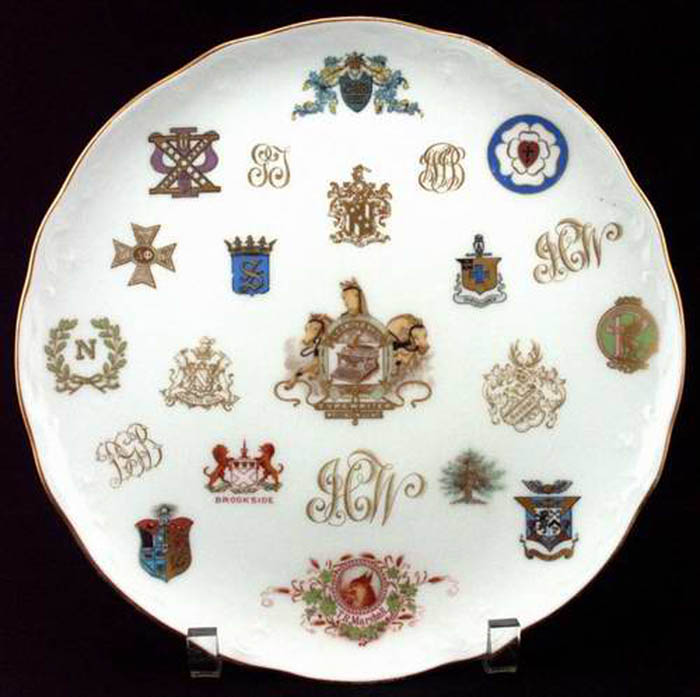 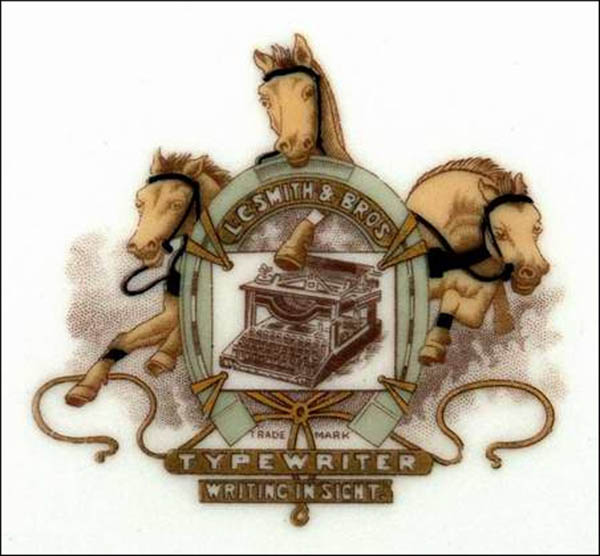 L.C. Smith and Bros. Typewriter. "Writing in Sight" is the motto on the banner at the bottom of this logo bearing the trademark for this company that includes three running horses. 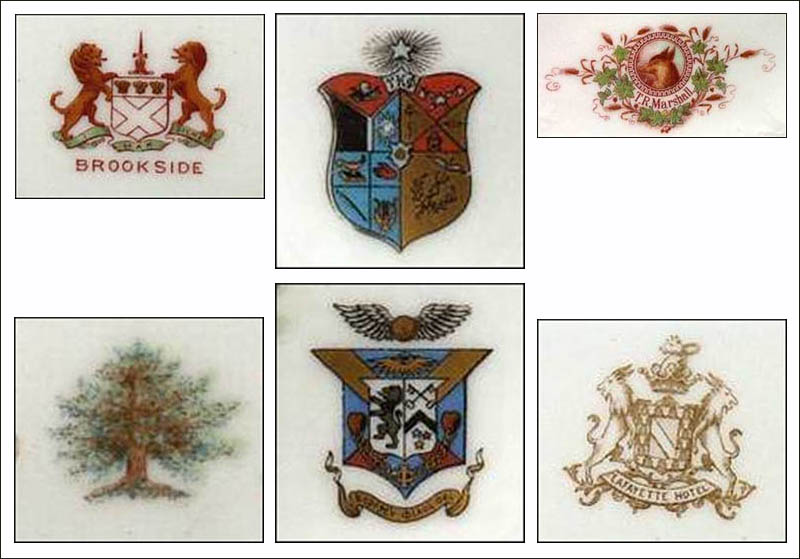 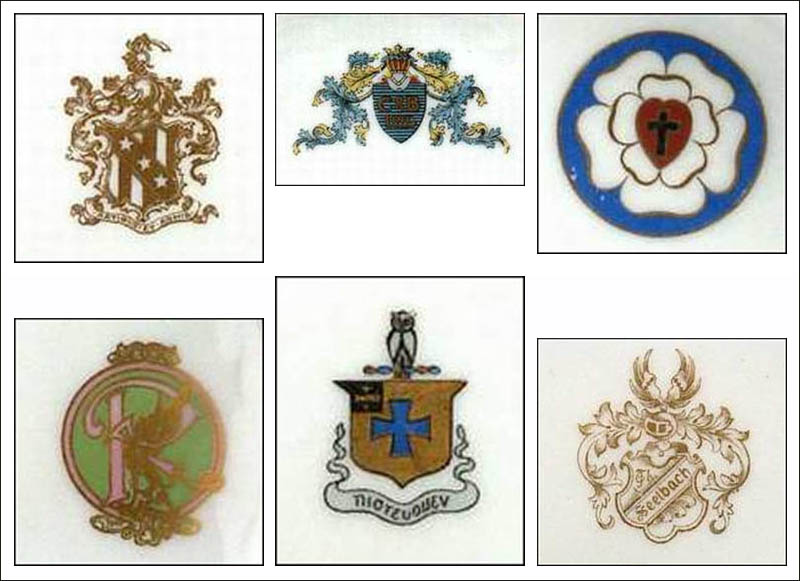 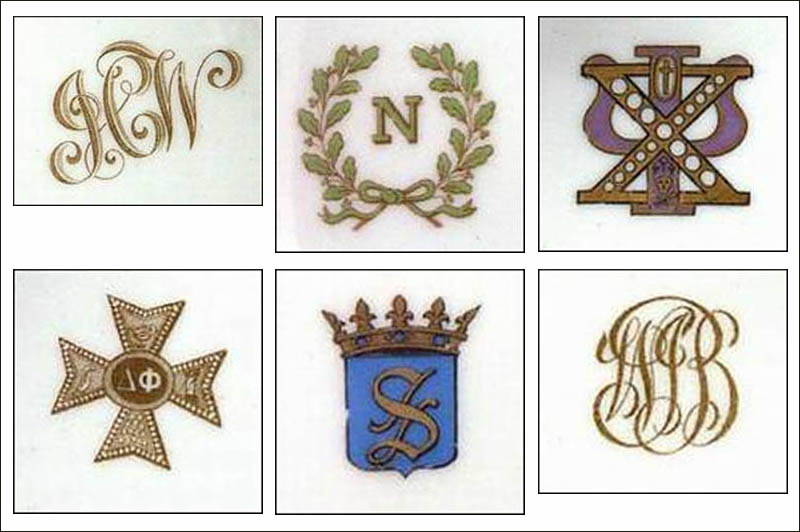 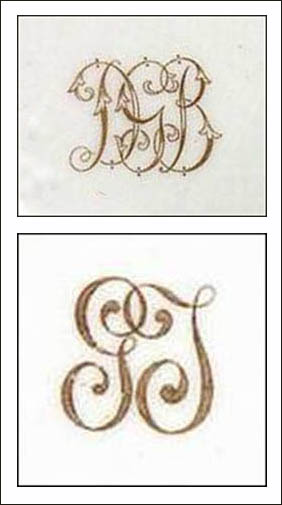 Notes: White body with embossed edge and gold-coin pin line rim. Topmarked with 22 sample logos, including five unknown gold-coin monograms. (ID's, where known, are shown on each grouping's photo.) The center featured image is the L.C. Smith and Bros. Typewriter. "Writing in Sight" is the motto on the banner at the bottom of this logo bearing the trademark for this company that includes three running horses.

Identification for photos (where known). Click on photos for larger images: 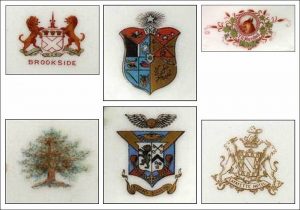 Grouping 1:
Row 1:
(A) Unknown Brookside topmark; (B) Unknown Coat-of-Arms: In colors of brick red, Wedgwood blue, black and gold, this elaborate coat-of-arms is topped with a five-point radiating star; and (C) T.R. Marshall topmark, possibly related to Thomas R. Marshall (1854-1925), a prominent merchant of Columbus, Ohio, who went on to become governor of Indiana from 1909-1913 and Vice-President of the United States under President Woodrow Wilson for two terms from 1913-1921.
Row 2:
(A) Oak Tree: Small unknown logo depicting an oak tree; (B) Coat-of-Arms:  In colors of brick red, Wedgwood blue and gold, this unknown elaborate coat of arms is topped with an apparent winged globe; and (C) Lafayette Hotel crest logo. 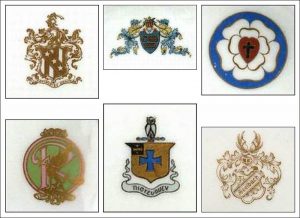 Grouping 2:
Row 1:
(A) Artibus et armis "By arts and arms" Family motto from the coat-of-arms for the "Elton" family; (B) C & B Line Cleveland & Buffalo Steamship Line formed in 1892; and (C) Black Cross set within a Red Heart that is a symbol used by the Lutheran Church in America. The petals in the background are Dogwood tree blossoms.
Row 2:
(A) Art Nouveau-styled letter "R" set within a lavender outer circle trimmed in gold; the circle is filled in with a light green background color; (B) Unknown fraternal mark: An owl is perched upon a bar above this logo which consists of a blue cross centered upon a shield of gold with a motto banner beneath; and (C) Seelbach: Built in 1905, the Seelbach Hotel is considered a landmark to the golden era with its grand ambiance inspiring author F. Scott Fitzgerald to use The Seelbach as a backdrop for Tom and Daisy Buchanan's wedding in The Great Gatsby. 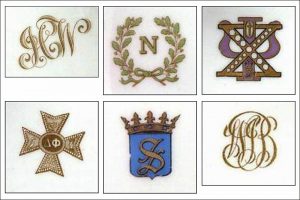 Grouping 3:
Row 1:
(A) Unknown monogram; (B) Unknown topmark letter "N" set within a partial wreath; and (C) Alpha Kappa Delta of Chi Phi – At the top of the "I" is a Christian cross, while at the bottom is a skull and crossbones. The lavender color of the "Y" and "I" is beautiful trimmed in gold, and the gilt letter "X" with all the circles in the crossbars.
Row 2:
(A) Greek letters Delta Phi within an oval of gold with top, bottom, left and right extensions from the center, each individually containing significant, but indistinguishable symbols. Delta Phi (ΔΦ) is a fraternity founded in 1827 at Union College in Schenectady, New York. Founded as part of the Union Triad, along with the Kappa Alpha Society and Sigma Phi Society, Delta Phi was the third and last member of the Triad. The organization has never disbanded, making it the oldest continuously running social fraternity; (B) Letter "S" set against a crowned background of blue forming an unknown logo; and (C) Unknown gold-coin monogram.