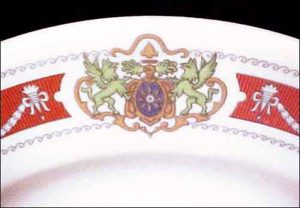 Notes: The Plaza Border was introduced in the late 1930s. It would have been available on the Old Ivory body through the mid-1960s, and on the Flint body until 2009.

It has a red border with gray and white torches, shells and swag ornaments interspersed with multiple instances of crests that are made up of griffins or gryphons in green facing each other, separated by a central oval of blue. The crest background is a light brown or tan.