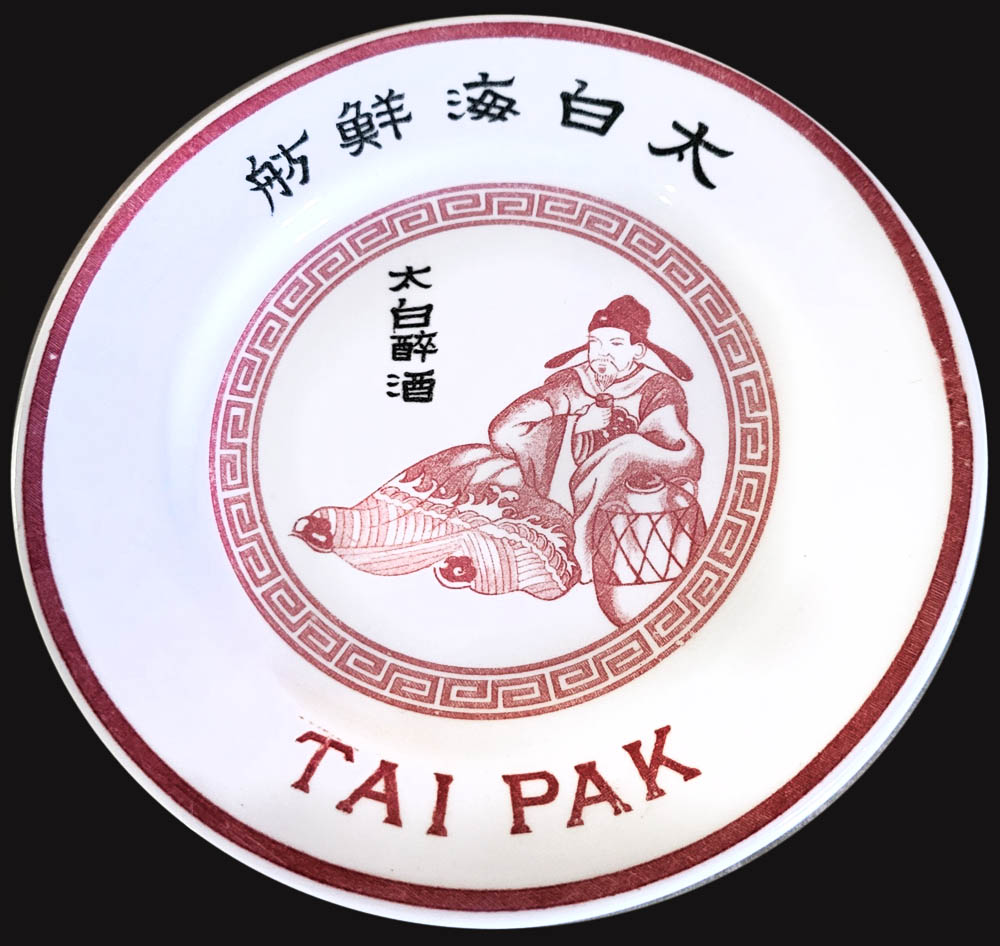 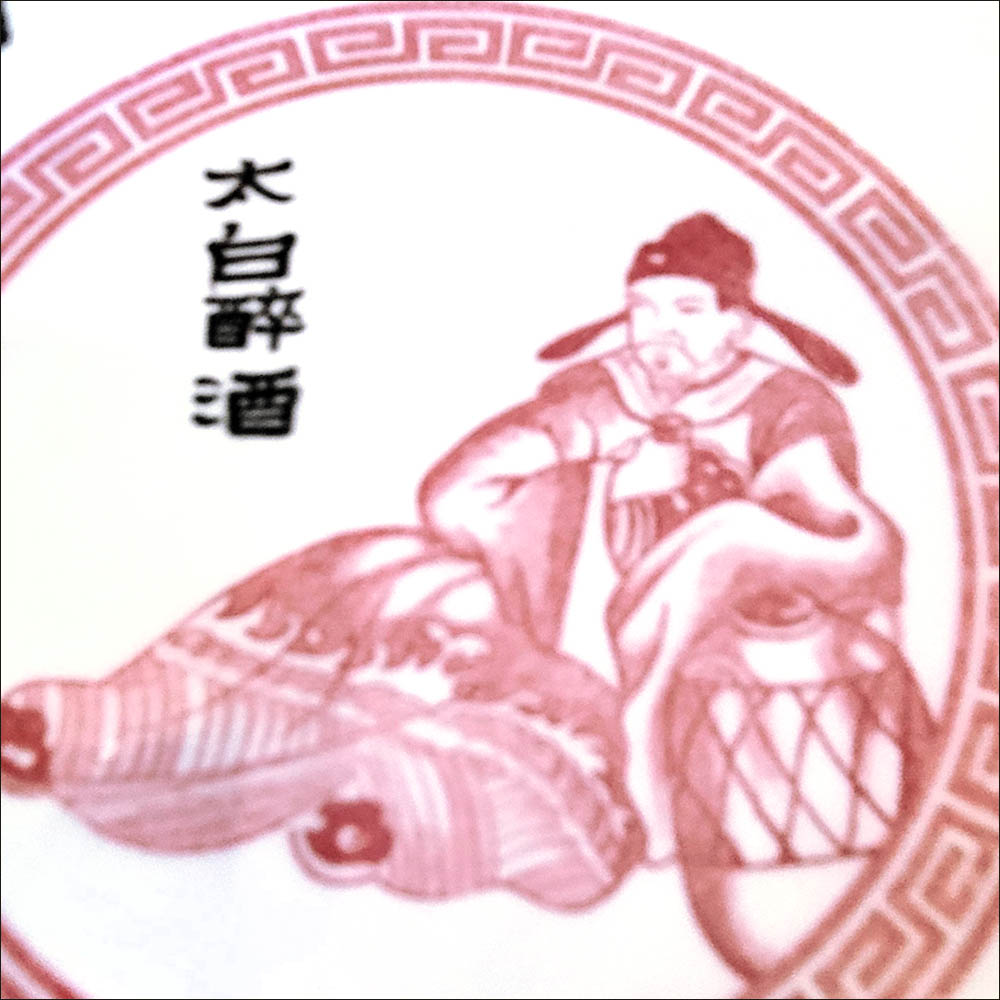 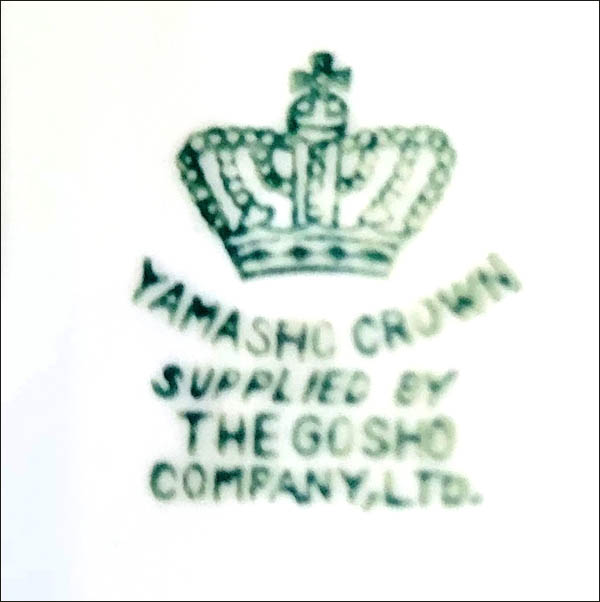 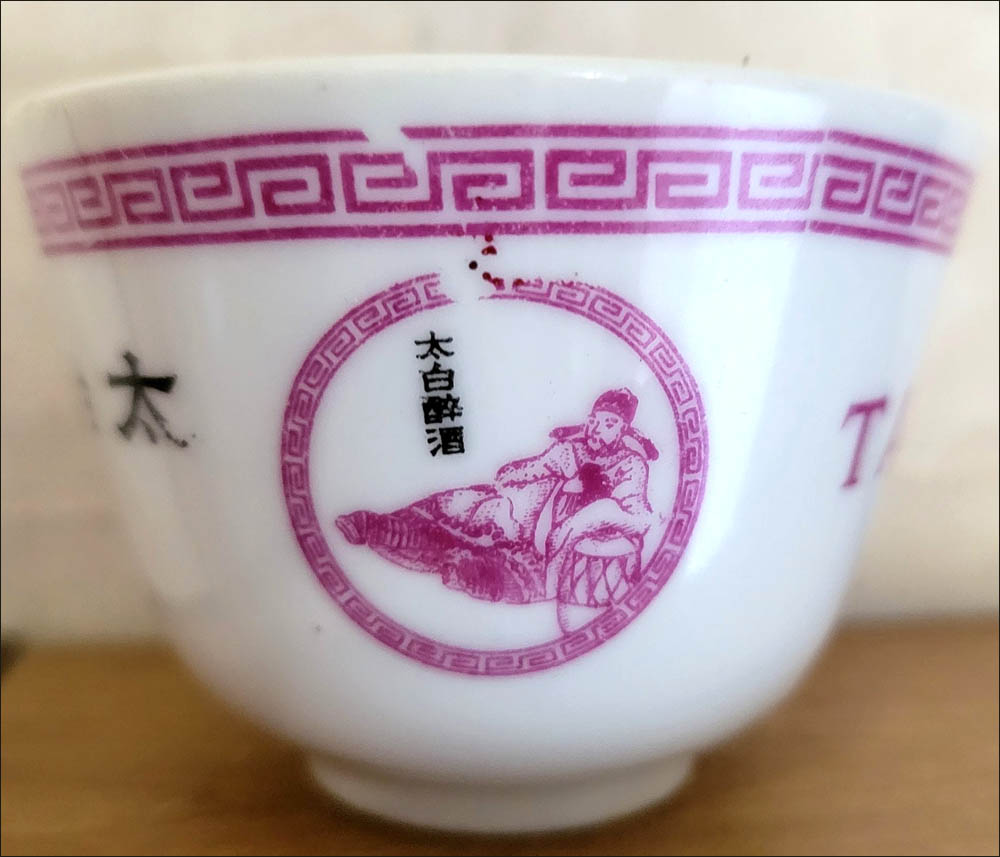 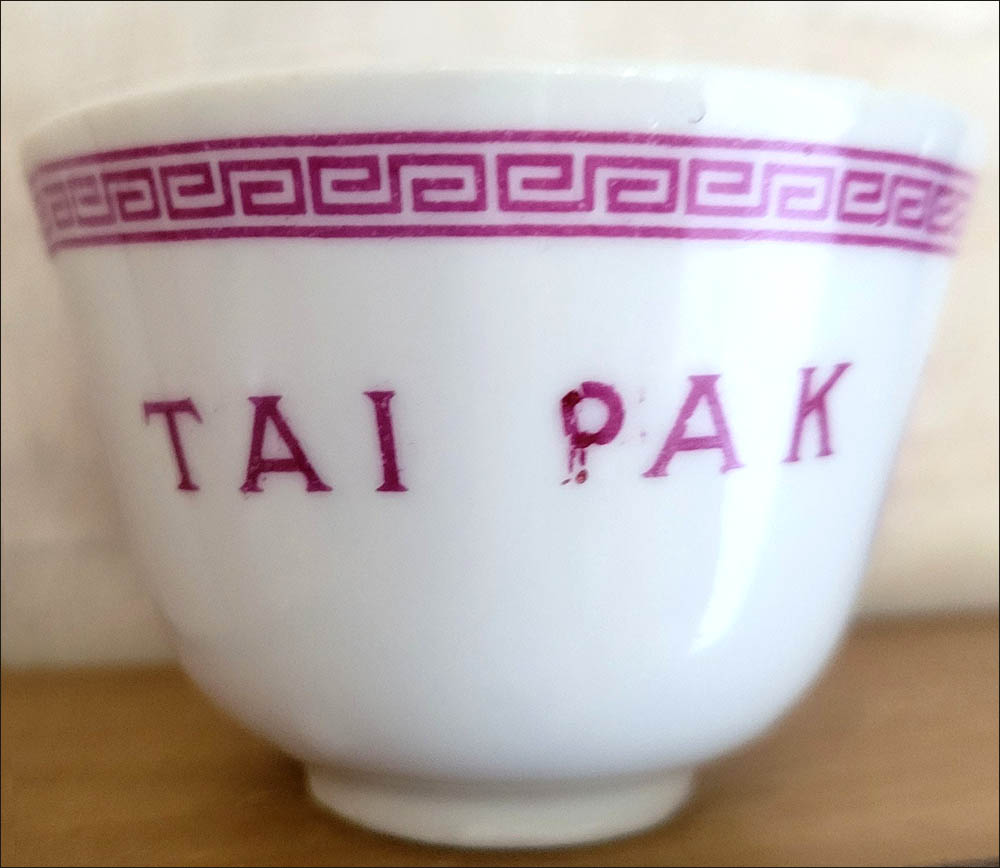 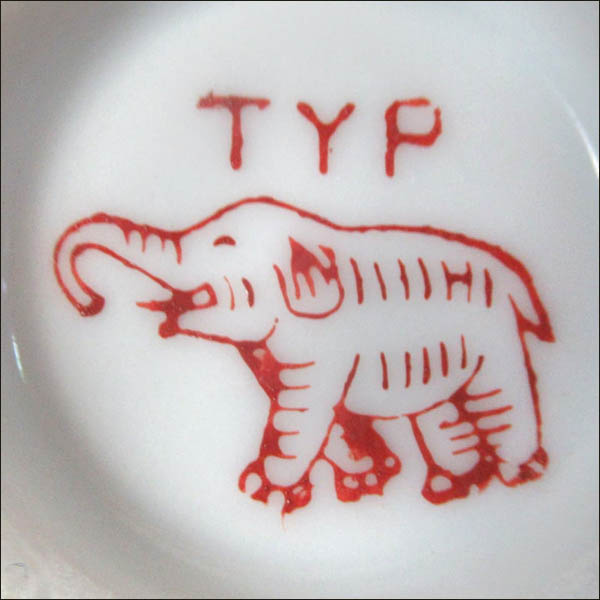 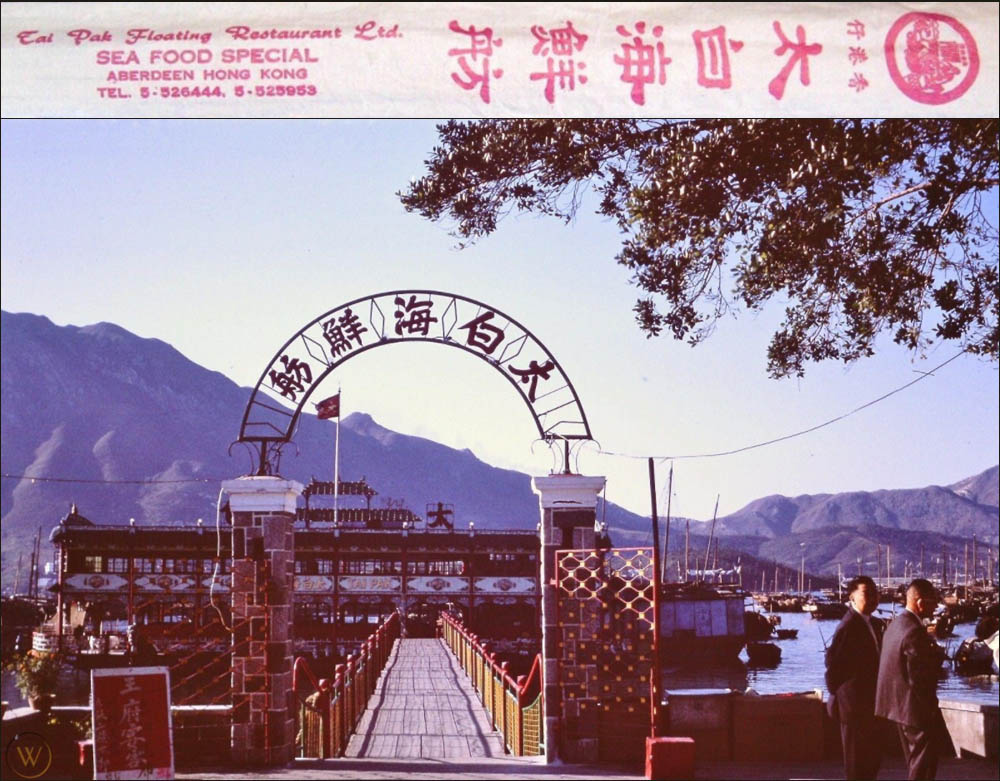 Top, chopsticks wrapper; below, gangway leading to Tai Pak. The curved signage over the columns is a match for the lettering on the wrapper. 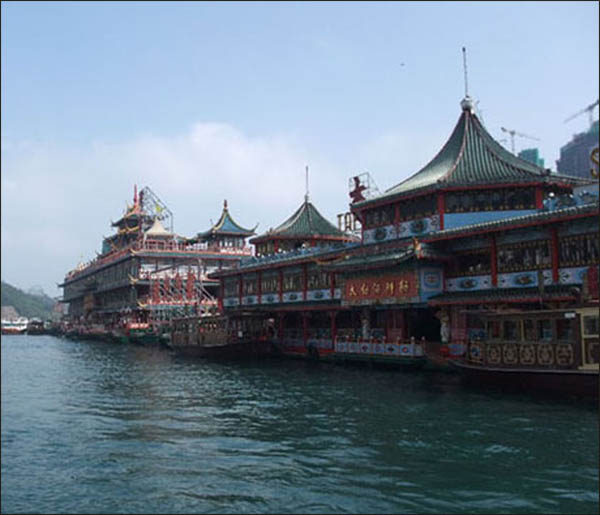 Photo courtesy Hong Kong Extras. Tai Pak is in the foreground and Jumbo is toward the back in the photo. 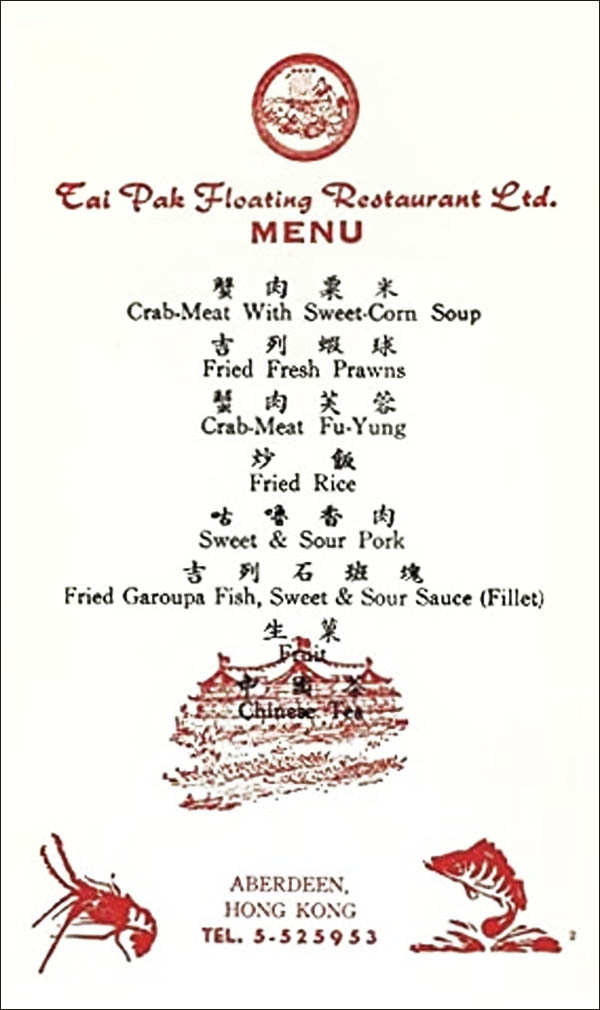 Notes: The Tai Pak Floating Restaurant opened in 1952 on a huge barge in Aberdeen Harbor, Hong Kong, located off the southwest coastal city of Aberdeen on the Hong Kong Island. A massive fire broke out on the ship in October 1971 that killed 34 and injured many more. The restaurant was restored or rebuilt a few years later under different ownership, and according to a Wikipedia article, is now located adjacent to the Jumbo Floating Restaurant. From Culture Trip's website, both restaurants are managed by the same "conglomerate Jumbo Kingdom, a tourist destination with shopping, entertainment and dining venues. They are connected to each other via a walkway – and despite being described as 'floating' restaurants, they are moored by concrete, so diners don't have to worry about getting seasick."

These venues have been visited by millions over the years. The Tai Pak was featured in the films "Love Is a Many-Splendored Thing" and "Enter the Dragon." Access to the floating restaurant was by shuttle boat.

According to Hong Kong Extras website, "Jumbo Kingdom closed in March 2020 and in November 2020 it was announced that the floating restaurants are to be donated to Ocean Park to form a heritage and leisure attraction under plans to develop part of south Hong Kong Island as a tourist hub." However, according to an article in the June 20, 2022 issue of The Washington Post, "The Jumbo Floating Restaurant — also known as Jumbo Kingdom — was towed from the city last week after closing down during the pandemic. The vessel hit adverse weather Sunday and capsized near the Paracel Islands." A story in Dim Sum Daily indicates that Tai Pak was left behind when Jumbo Kingdom began its fated voyage with the hopes for a "white knight" taking over its operations, holding out the hope that it might one day reopen in the harbor.

The plate and the teacup have different backstamps. The plate is backstamped "Yamasho Crown," a Japanese company. The elephant mark on the cup with YTP, is unknown.