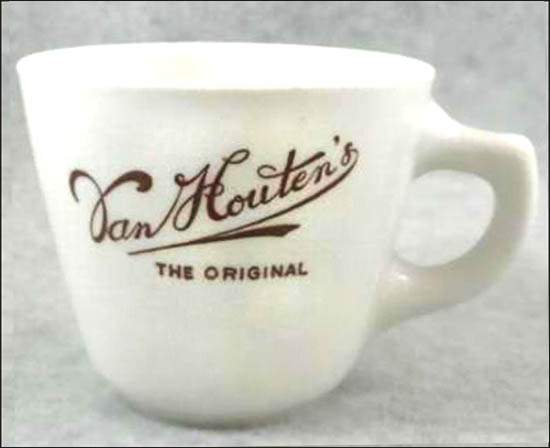 Notes: Father and son, Casparus and Coenraad Johannes Van Houten, respectively, were two of the most important figures in the history of chocolate as we know it today. In 1828, Casparus van Houten Sr. patented an inexpensive method for pressing the fat from roasted cacao beans. The center of the bean, known as the "nib" contains an average of 54% cocoa butter which is a natural fat. Van Houten's machine, a hydraulic press, reduced the cocoa butter content by nearly half. This created a "cake" that could be pulverized into cocoa powder, which was to become the basis of all chocolate products.

His son, Coenraad Johannes was a Dutch chemist and chocolate maker known for the treatment of cocao with alkaline salts to remove the bitter taste and make cocoa poweder more water-soluble; the resulting product is still called "Dutch process" chocolate.

Casparus opened a chocolate factory in Amsterdam in 1815 using the inventions described above. The patent expired in 1838, enabling others to produce cocoa powder and build on Van Houten's success.

The Van Houten company was sold in 1962 to W.R. Grace, and the factories in Weesp closed in 1971. Still in use, the Van Houten brand name has been transferred several times, and since 2000, has been owned by the Swiss firm Barry Callebaut Group.

Off-white body, topmarked "Van Houten's" in chocolate brown script lettering, with the phrase "THE ORIGINAL" beneath.