Manufacturer: Scammell China
User: The Versailles
Date of bowl: Circa 1928-1936 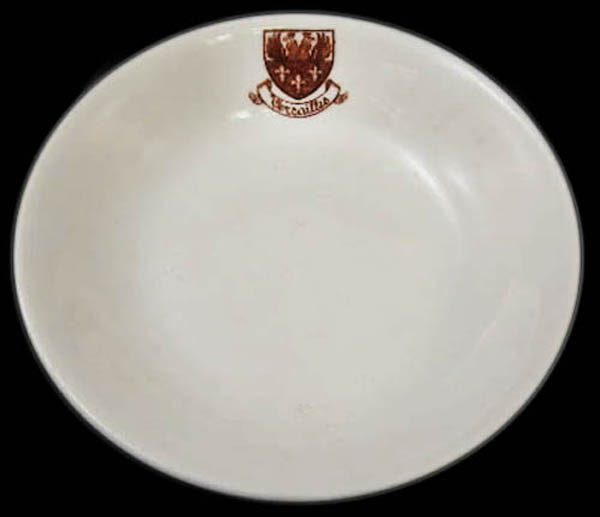 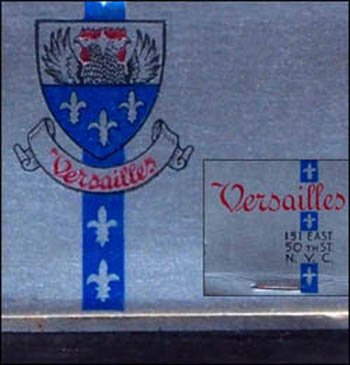 Notes: According to information gleaned from The New York Times and Yodelout! New York City History, The Versailles, at 151 E. 50th Street in New York City, was built in 1920 as an opera house. In the 1930s, Nick Prounis and Arnold Rossfield converted the former theater into a restaurant/cabaret that they operated as The Versailles.

It was a large, two-story oval room with a domed ceiling and stage at one end. It featured nightly performances by their Cuban orchestra and special performances by well-known stars such as French singer Edith Piaf. After 22 years of operation, The Versailles closed abruptly rather than dealing with $750,000 in unpaid taxes.

In May 1958, Morris Levy, owner of Roulette Records, took over the former Versailles and reopened it as the Roundtable, redecorated in a "King Arthur" motif but named as a reference to his record company. Levy gave all of the old remaining Versailles china, glassware and tablecloths to Trudy Heller, a former partner in a defunct musician's hangout, "The Blue Note." Heller used the furnishings in her small jazz spot at 6th Avenue and 9th Street, which she also named Versailles.

The Roundtable was later renamed Noir. By August 2014, it had just been refurbished and reopened as a 468-seat Mediterranean restaurant named Ibis.

The bowl shown and the pieces described below all came from the original club. The bowl's design is reddish brown on a white base. It is crested with a two-part shield containing intertwined rooster heads with open wings in the upper section and three fleur-de-lis in the lower section. A curved banner below the shield has the word Versailles in script font.

Other pieces with this logo included service plates (found on eBay) with full cobalt blue rims with the same topmark and coin gold lines on the rim and verge. These would have had a date range of circa 1928-1930. Ashtrays had the cobalt blue rim with coin gold rim and verge pin lines, and the center of the well contained the shield in coin gold with an outer circle of fleur-de-lis.

The earliest pieces were on the regular Lamberton body with the S in a shield with encircling wreath backstamp. Later production was on an ivory body, furnished by Barth Equipment Co., of New York City.