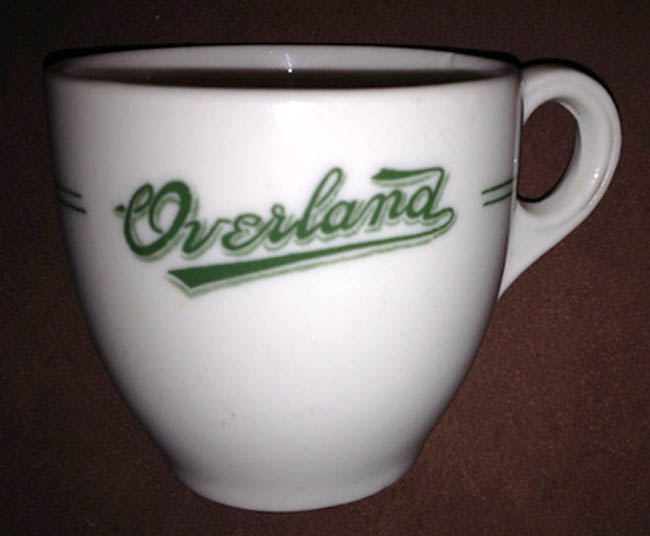 The Overland automobile was introduced in 1903 by the Overland Company of Indianapolis. In 1908, the company was acquired by 35-year old John North Willys, who then moved production from Indianapolis to the former Pope automobile factory in Toledo, Ohio. In 1912, the company was renamed Willys-Overland and the Toledo factory was enlarged, making it the second largest such facility in the United States, with 11 million square foot of production space.

As part of this expansion, a new seven-story administration building was built in 1915. This building contained a 432-seat employee cafeteria, as well as an executive dining room. Based on the size of this sprawling factory complex, there were probably several other employee lunch rooms or cafeterias located throughout the facility.

In 1926, production of the Overland automobile ended, but by that time it was only one of at least eleven different models the company was producing. During World War II, the military-designed General Purpose vehicle, better known as the Jeep was produced here.

The china used in these dining facilities is crested with a green transfer version of the Overland script logo, flanked by green pin lines. A green rim line completes the pattern. The demi cups included in this china service may have been used in the executive dining room, rather than the employee cafeteria. The distributor for all of the cafeteria equipment was the John Van Range Company of Cincinnati, Ohio. The manufacturer of the china is unknown, but it might be Shenango China, which was carried by John Van Range.

NOTE: There are very slight variations between the official "Overland" script trademark and the version that appears on the china. These variations are on the two tail strokes extending from the 'd.' The upper tail stroke does not extend back over the 'a' and the lower back stroke has a straight angled left end rather than the concave end on the official trademark. According to Willys-Overland collectors and historians there were a number of variations over the years.