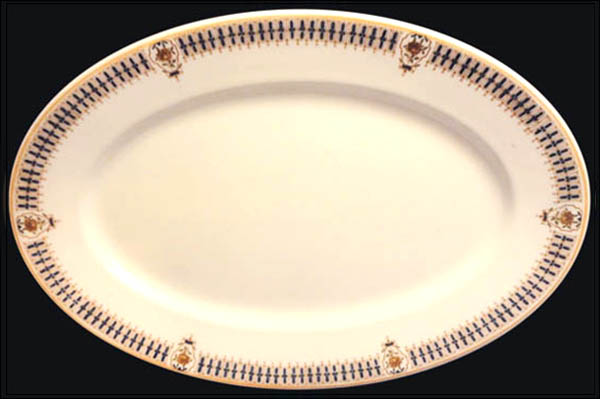 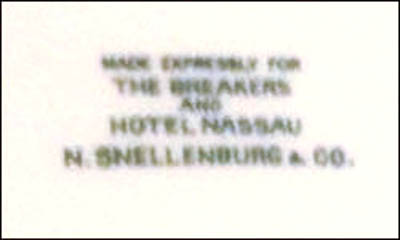 Notes: Located in Atlantic City, New Jersey, the 12-story, 525-room Breakers Hotel opened in 1916. It fronted on the boardwalk at New Jersey Avenue. Directly behind it was the 6-story, 800-room Rudolph, originally built in 1895 and operated by Joel Hillman in 1909. When the Breakers opened it incorporated the older Rudolph section and both operated under the Breakers name. By 1922, Mr. Hillman also operated the Nassau Hotel in Long Beach, Long Island, New York. It is likely around that time, that this new pattern was created for use in both hotels. As a profit enhancer, both hotels were furnished with some of the same equipment including the china and the wooden hangers in the bedroom closets, which were marked with both hotel names.

Trenton white body with a border pattern featuring a band of blue geometric shapes outlined in golden yellow, intersected by a rose set within a frame. The rim edge of the decal border has a thick golden yellow line. Backstamped "Made expressly for The Breakers and Hotel Nassau N. Snellenburg & Co." N. Snellenburg was a Philadelphia Department store that had a commercial supply department. Impressed in the china body is "Maddocks Trenton China."

The Breakers also used Lamberton China bedroom dresser trays (not shown) crested with their trademark sunrise and wave design within a shield, topped with a seashell.