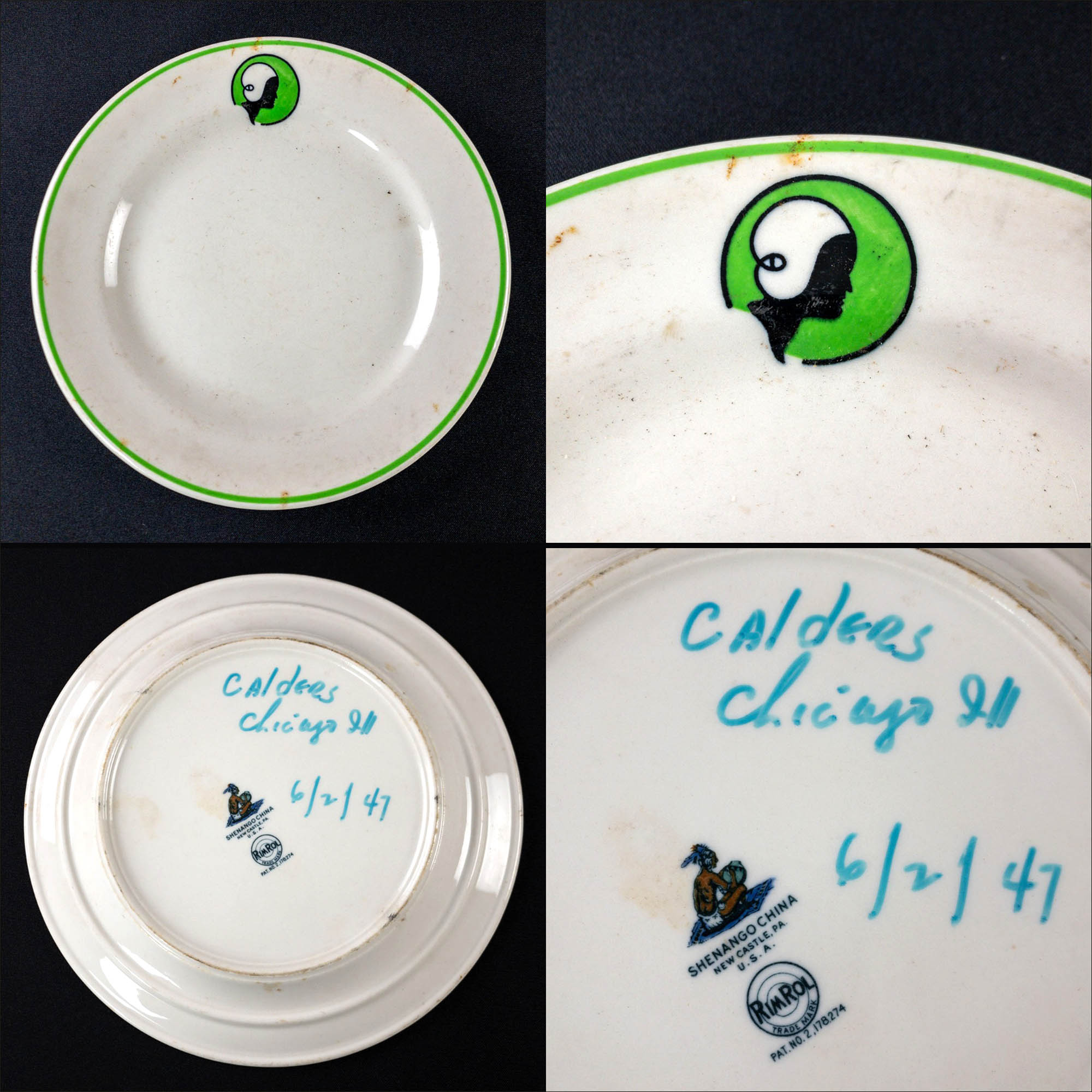 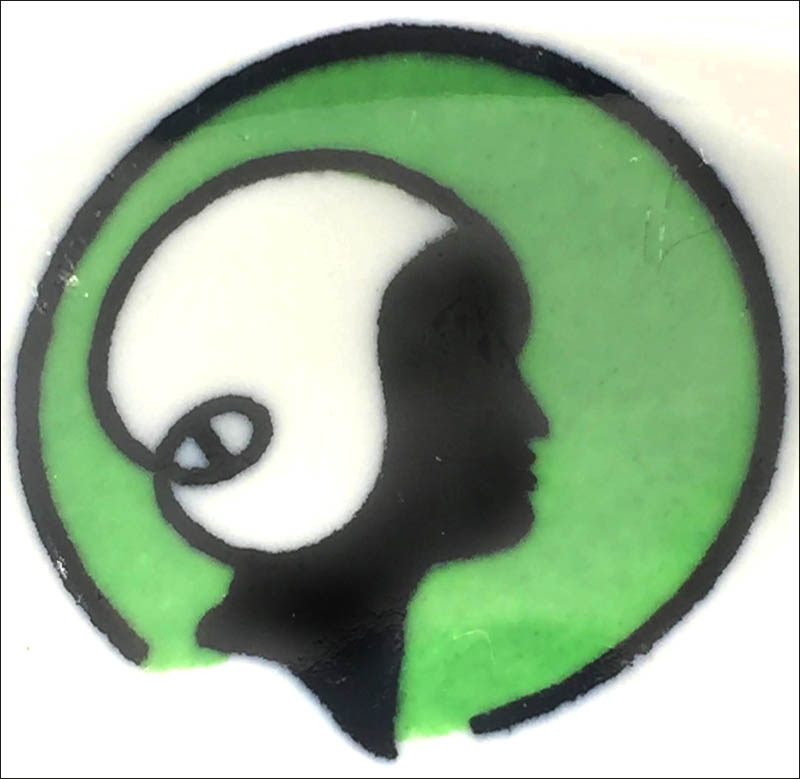 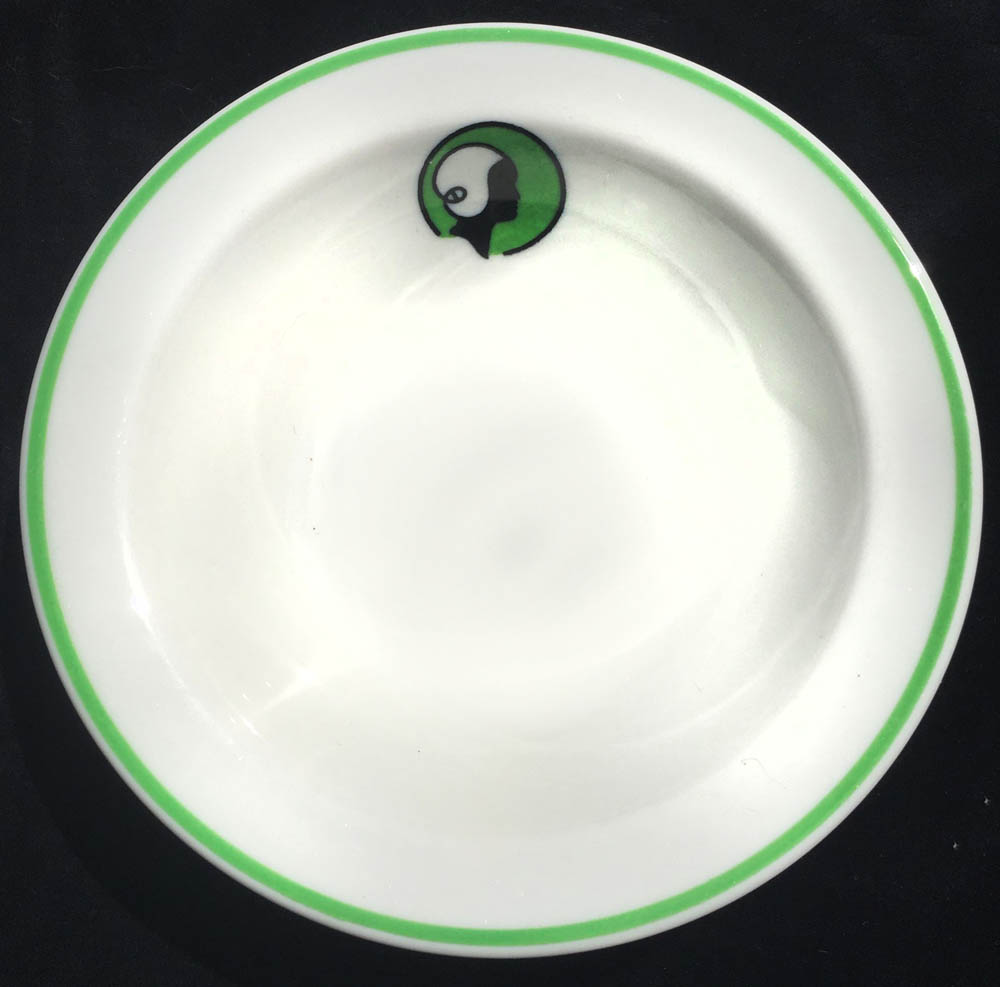 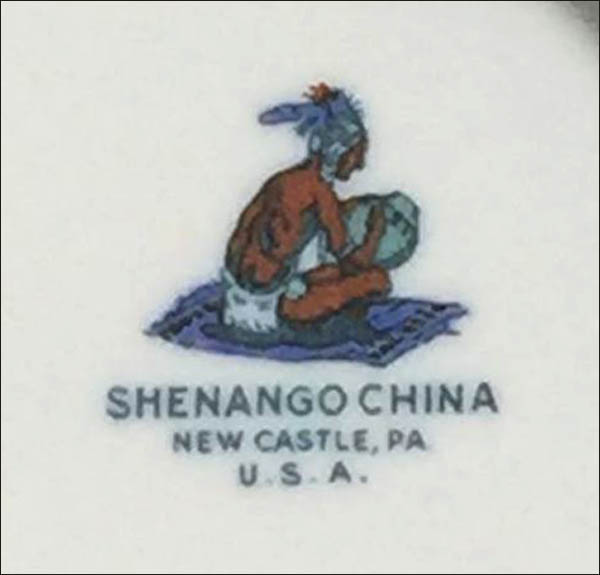 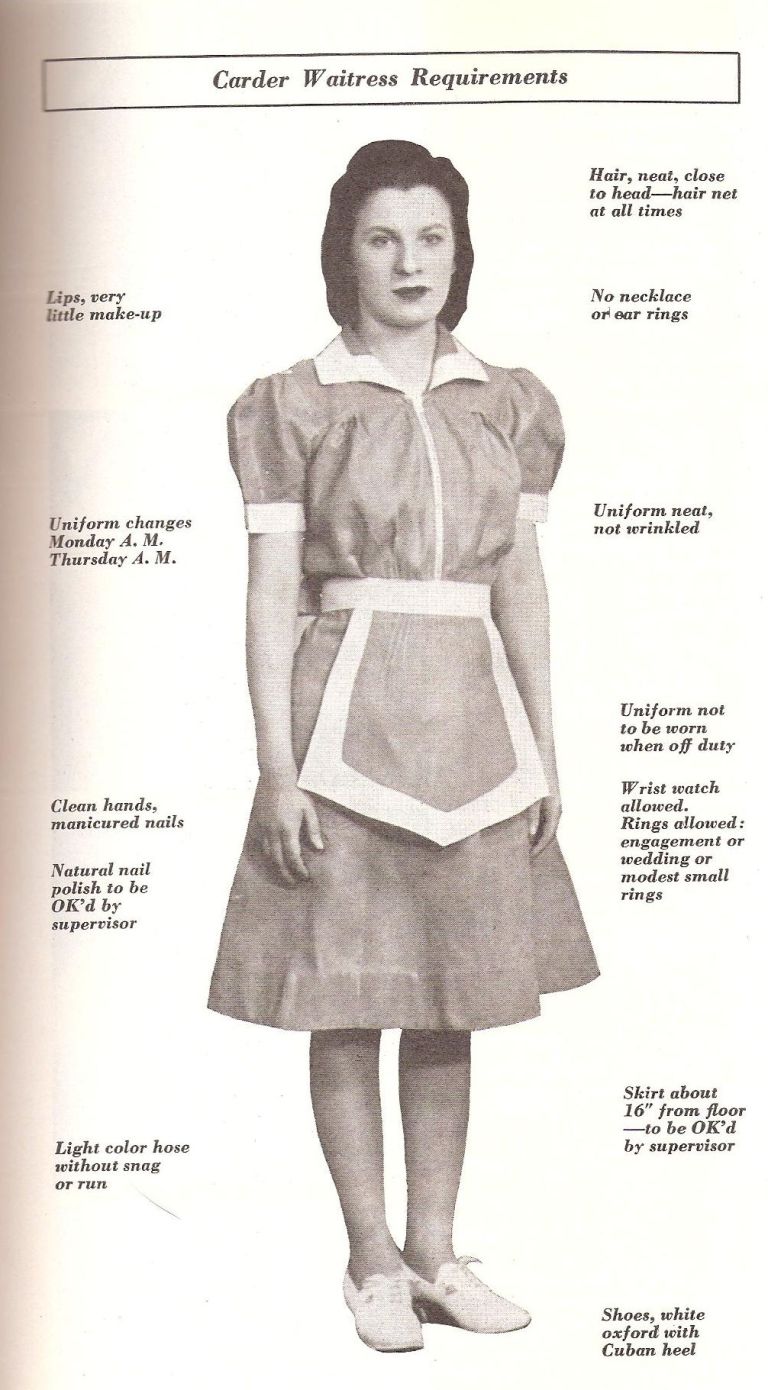 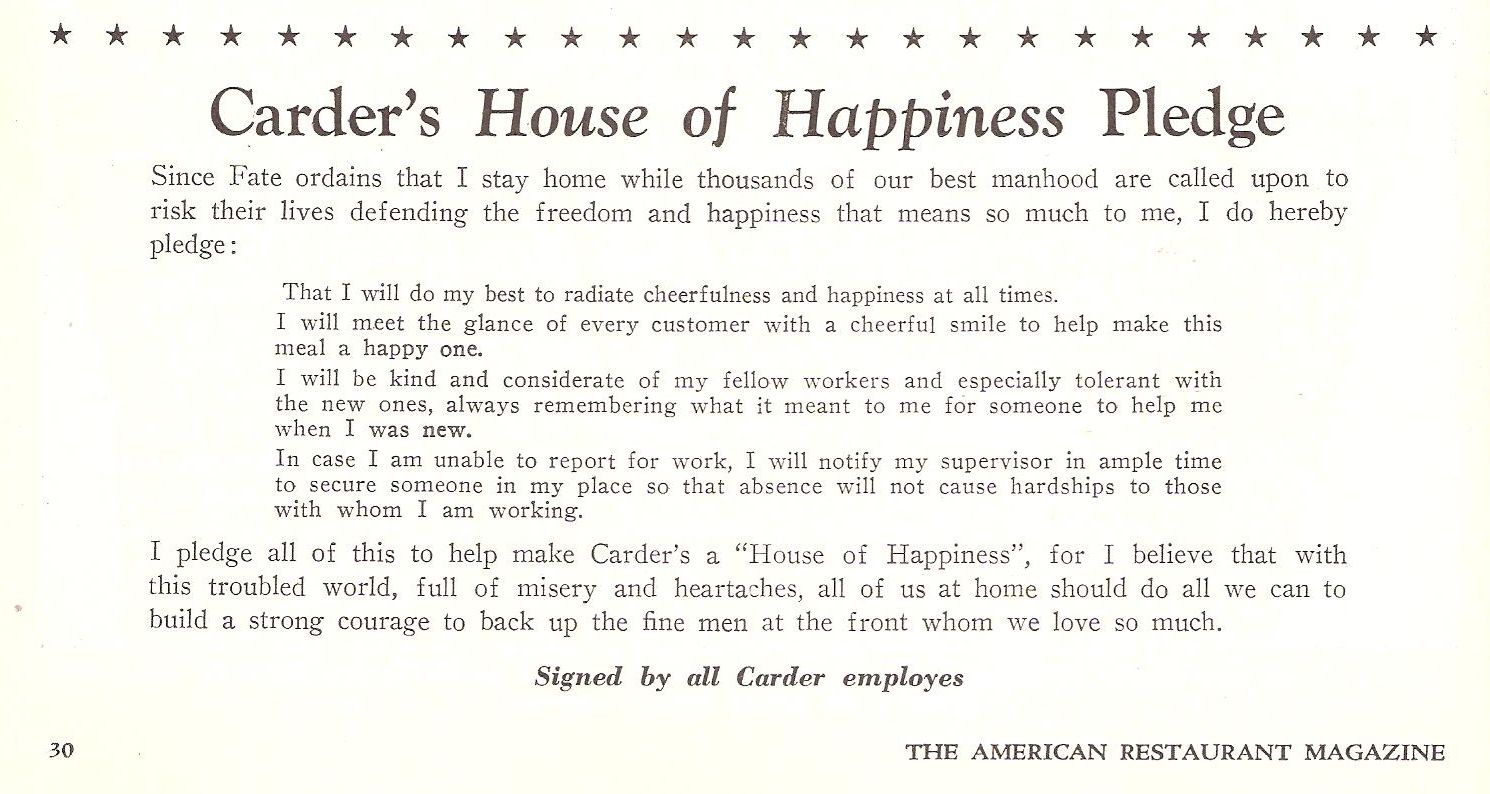 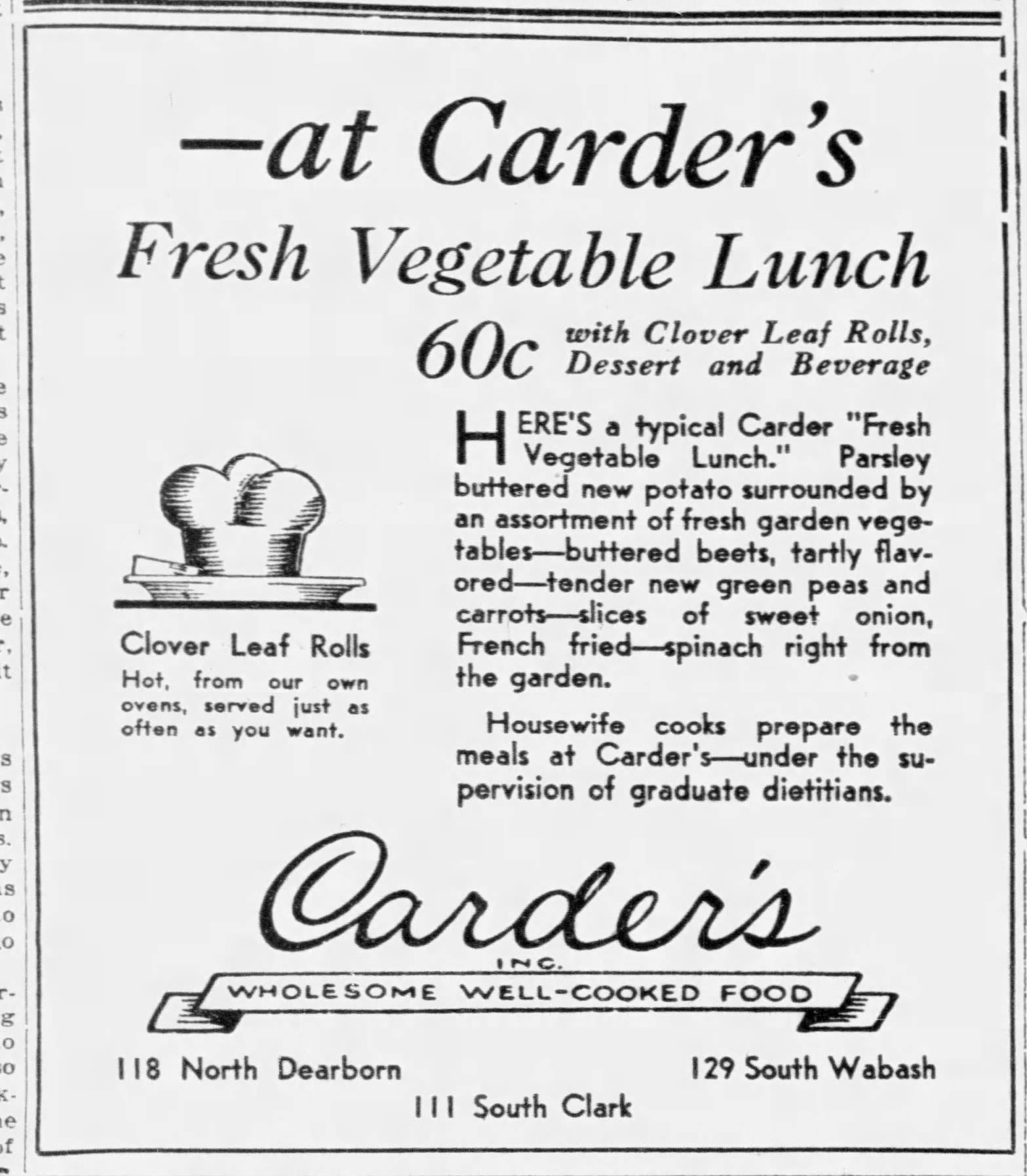 Notes: This design with its bold black and bright green and silhouette of a woman in flapper hat was first used at Julia King's Tea Rooms and Candies with three locations in Chicago. After her death, the business was sold and purchased by Al B. Carder in 1930. Even though all the ads and menus associated with his restaurants are markedly different from the china pattern, it is indisputable that the RimRol backstamp and decal on the back of the sample plate, above, date its production to 1939-1948.

During his career Carder was one of the founders of the National Restaurant Association (NRA), serving as secretary and then president as well. It was probably in 1933 – in the midst of the Great Depression – that as president of the NRA he set up an office at the Willard Hotel in Washington, presumably to serve as a lobbyist for the association. He also managed a Harding's in Chicago, where he was featured in the Feb. 2, 1929 issue of Ottawa Citizen.  In an article titled, "A Restaurant in Chicago Where Every One of the Waitresses is a College Graduate." It quotes Carder's "success story" in hiring: "'This is a sort of post-graduate course for the girls who have taken home economic and institutional management courses in college," he says. … 'We pay these girls a nominal salary and put them to work doing everything from scrubbing floors up to taking cash at the door. And they have to make good or we don't use them.'"

Carder also published an image of a young woman (shown above) with the title: Carder Waitress Requirements. Like other restaurants that standardized service (Fred Harvey and his Harvey Girls come to mind), Carder dictated, for example, jewelry and makeup that could be worn, color and style of shoes, and length of dress.

Carder advertised his "House of Happiness," a pledge signed by all employees that was included in a World War II-era menu:

"Since Fate ordains that I stay home while thousands of our best manhood are called upon to risk their lives defending the freedom and happiness that means so much to me, I do hereby pledge:
That I will do my best to radiate cheerfulness and happiness at all times.
I will meet the glance of every customer with a cheerful smile to help make this meal a happy one.
I will be kind and considerate of my fellow workers and especially tolerant with the new ones, always remembering what it meant to me for someone to help me when I was new.
In case I am unable to report for work, I will notify my supervisor in ample time to secure someone in my place so that absence will not cause hardships to those with whom I am working.
I pledge all of this to help make Carder's a "House of Happiness," for I believe that with this troubled world, full of misery and heartaches, all of us at home should do all we can to build a strong courage to back up the fine men at the front whom we love so much."

It appears that Carder took over all three locations of Julia King's Tea Rooms when he purchased them (but not the candy shops), but it is not clear whether he kept them all open and when his business closed. It seems to have remained open into the 1960s. Most references refer to the location at 118 N. Dearborn Street, whether for Carder's (restaurant) or Carder's Steakhouse, where he was the inventor of the "Sizzling Steak Platter" – and where steaks were served on sizzling-hot aluminum platters backstamped with his name. The other two locations do appear in the Carder's ad shown above: 111 South Clark, and 129 South Wabash.

White body plate with a lime green thick line around the outer edge of the border. At the top of the plate and just inside the verge is the silhouette of a woman's head in black. She is wearing a white flapper hat. The silhouette is encircled by a black line and the circle is filled with the same lime green that is around the edge. The spelling on the sample plate should be Carder's and not Calder's.