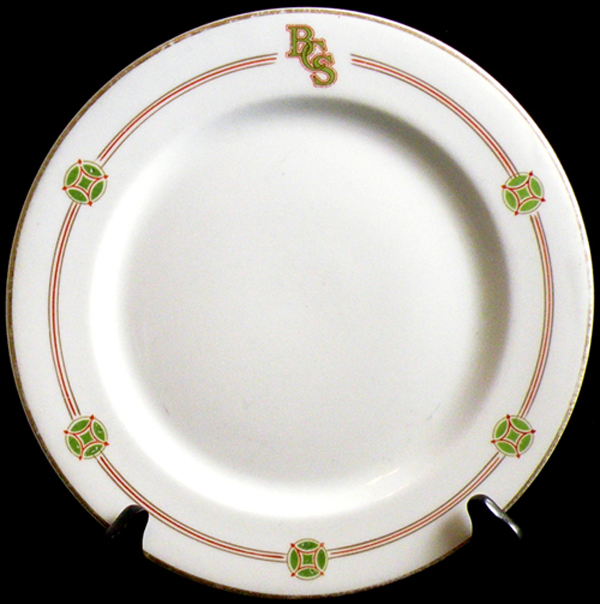 Notes: This pattern was identified by a former Syracuse China employee who estimated it was introduced around 1909. It has been seen with and without the BCS topmark.

With the BCS topmark and having been purchased from a Michigan seller, it was strongly suspected that at least the topmarked version was an early pattern used at the Battle Creek Sanitarium as a precursor to the more familiar Dorion pattern. This has been confirmed by a historian in Michigan.

An Internet search also turned up a reference to a private dining room at the sanitarium in which Eleanor Roosevelt dined in 1940. This pattern, thinner than most commercial china and with a gilded edge, would not have been a good choice for the large dining hall at the sanitarium but would have been appropriate for an afternoon tea service or use in such an executive/private dining room at the San.

"Circles" was a multicolored stone lithograph decal. The design consists of the metallic gold line on the edge of the plate with three alternating lines of bright green, red and bright green on the border interspersed with what might best be described as a Celtic circle decoration in bright green and red. In the case of the Battle Creek version, the border is also interrupted with an intertwined BCS in green with red outline.