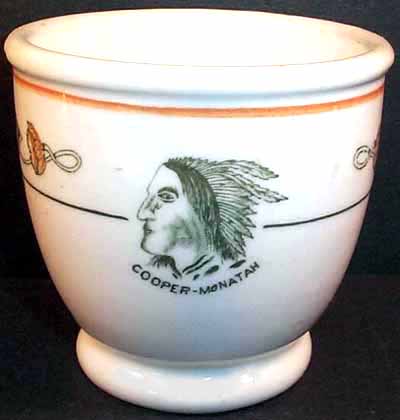 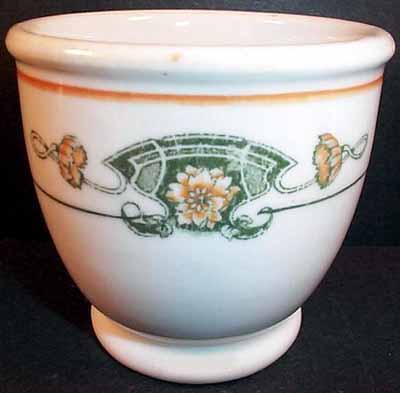 Notes: The Cooper-Montah Hotel was located at 47th and Drexel, Chicago, IL. It was owned by the Cooper Hotel Company, which also owned the Cooper-Carlton Hotel, located in Chicago along Lake Michigan at Hyde Park and 53rd Street. This logo is similar to that of the Cooper-Carlton Hotel by Mayer China, except the word "Monatah" is in place of "Carlton." The eggcup features a Native-American warrior on the side done in shades of green with "Cooper-Monatah" under the image. The other side of the egg cup is adorned with a green, orange and olive floral design.

The Cooper-Monatah Hotel became General Hospital No. 32, when it was leased by the Army (for $52,500 per year) in October 1918. Completion of occupancy was completed in January 1919 after renovations costing $108,000. Records show it was to be evacuated August 1, 1919 and that "the United States Public Health Service desired the hospital upon its evacuation by the Army, and, therefore, new arrangements were made and the property was transferred to that service June 15, 1919."

It can be inferred that the date code for the egg cup's backstamp (stated in "Restaurant China Volume 2" as spanning the 1920s – 1930s) would stretch back to the date of the hotel's construction – prior to 1918 (when it was appropriated by the Army).