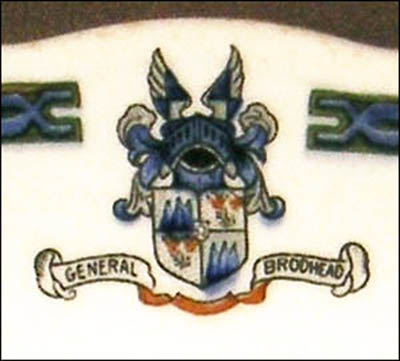 Notes: The 120-room General Brodhead opened in May 1927 at Seventh Avenue and 12th Street in Beaver Falls, Penn. It was named for the Revolutionary War hero, General Daniel Brodhead. By 2011, the hotel had been converted into apartments.

The celery tray is crested with a shield logo in blue, gray, rust and black. The Clinton pattern border that copyright notes show was designed in June 1926 by Ulrich Hagmann.