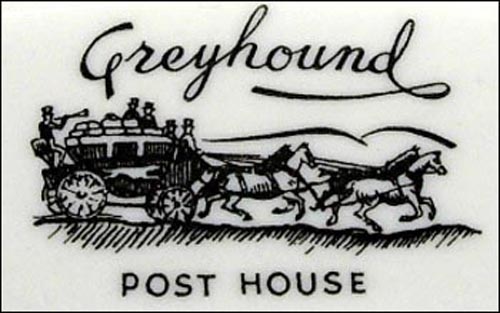 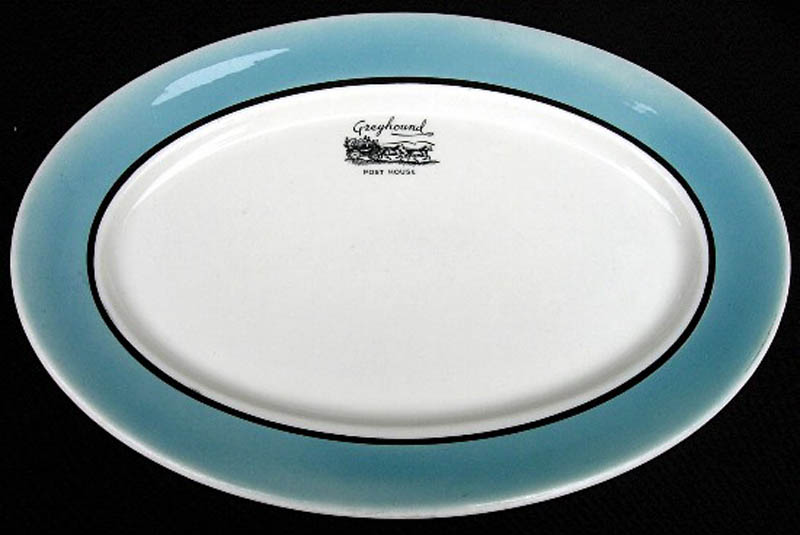 Notes: Established in 1940, Greyhound Post Houses offered both food and companionship to travelers and locals alike. Most of the Post Houses were open 24 hours so they became gathering places for night owls and people on the nightshift.

White body, wide turquoise band with thinner black line around the verge, black image of a stagecoach with Greyhound in script above. Shenango China was another manufacturer of this pattern.

Excerpt below copied from the Greyhound Post Houses menu, Tacoma, Wash., housed in the Special Collections of the University of Washington:

The Modern Development of An Early American Tradition

The Greyound Post House plan is the development of an idea conceived before the Declaration of Independence. It was in those days that travel by stagecoach was the practical mode of transportation and travelers were weary after their long, rough journeys. Three to four hours elapsed between these old time stopping places — only twenty to thirty miles apart.

The most famous of the old roads was the Boston Post between New York and Boston. (There were discriminating people taking these long journeys then — just as there are now among Greyound patrons.) The original inns where the stagecoaches stopped to change horses, to allow passengers time for breakfast or dinner, and to leave and pick up the mail, soon became famous because of their Old World charm and extraordinarily fine food.

Town folks, eager to see and discuss with these traveling strangers the great changing affairs of the colonies, made their way to these colonial inns and were on hand before the arrival of each stage. New friendships were made and the colonial farmer soon learned of the Boston Tea Party, English taxation, and the quiet rumors of a great uprising which was soon to grow into a war. The mails increased, secret plans were being formulated and these stopping places became even more important. The city dweller met the town folk at the inns when he arrived by stagecoach, and in manyof these famous eating places the great minds of our forefathers worked to produce what was to become the greatest democratic government of all time.

The original Post Houses were operated and owned by individuals. Each was of different architectural design and each had special dishes and the food was not the same. Each owner took pride in roasting wild geese or some other toothsome morsel, the recipe for which as a closely guarded secret.

Greyhound Post Houses, Inc., was established by Greyhound Lines for the purpose of supervising the sanitary conditions of the Greyhound stops and of helping toward the constand improvement of the food offered Greyhound passengers. Safe drinking water and pure milk are part of its regular inspection duties. Greyhound Post Houses, Inc., has its own Health Division under the supervision of a sanitary engineer. Restrooms throughout the Greyhound system are undergoing complete changes to arrive at as modern a system of clean, sanitary and comfortable conditions as it is possible to attain. The personnel of Greyhound Post Houses, Inc., is comprised of men and women long experiences in the supervision of sanitation, food, and the general betterment of the restaurants along Greyhound routes. The company plans to make each stop a place different from the last. Not the same ham sandwich, not the same design in building construction, but a rest or luncheon stop to look forward to with pleasure and comfort.

While it is difficult in these modern times to obtain the atmosphere of charm of the older days found in the Colonial Post Houses, we believe you will agree that the modern restrooms, electric refrigeration and our heating systems would surprise those fine old proprietors of the original Post Houses.