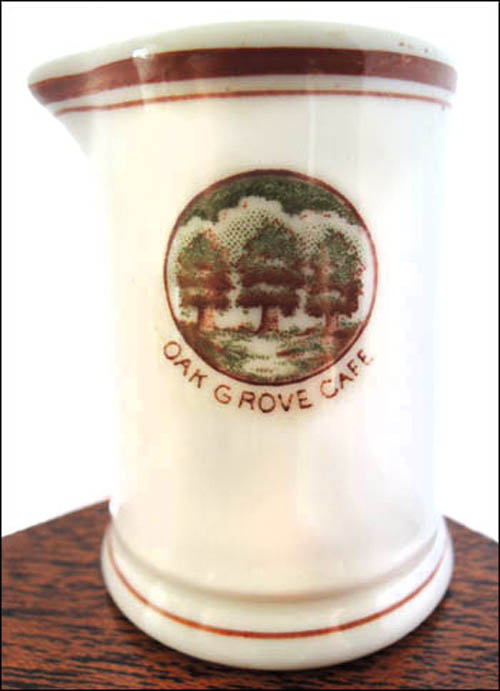 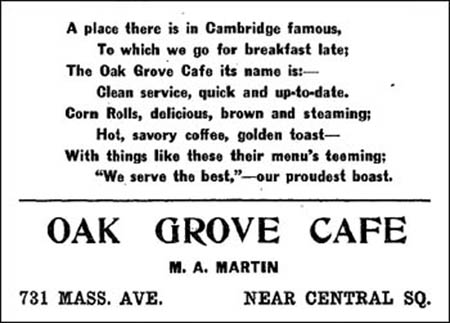 Notes: An Oak Grove Cafe was located near Central Square at 731 Massachusetts Ave., in Cambridge, Mass., whose manager was M.A. Martin. An Oct. 13, 1916 ad for Oak Grove Cafe in MIT's The Tech newspaper boasted offerings of corn rolls, hot coffee and golden toast (see image above).

Other locations for an Oak Grove Cafe were also found in the Boston Daily Globe on 9 Tremont Row, 413 Washington Street, Blue Hill Avenue, and 48 Federal Street, all in Boston.

It is not known if this business was connected in any way to Oak Grove Creamery, another business that operated in Boston and Cambridge at the end of the 19th and beginning of the 20th centuries. However, it is interesting that the managers/owners of both were men named Martin. But in an ad that announced a change of ownership at the Oak Grove Creamery, Nelson L. Martin stated: "To avoid mistakes, please notice that we have no connection with the so-called 'Oak Grove Farm Co.' at 80 Ruggles Street." Of course no record has been found that Oak Grove Cafe had a business on Ruggles Street or that it was associated with an Oak Grove Farm Co.

The handless creamer has a circular topmark outlined in a rust brown line that includes three oak trees side-by-side. Underneath, following the curve, is the text: Oak Grove Cafe.

Photo and ID contributed by CarolCardona