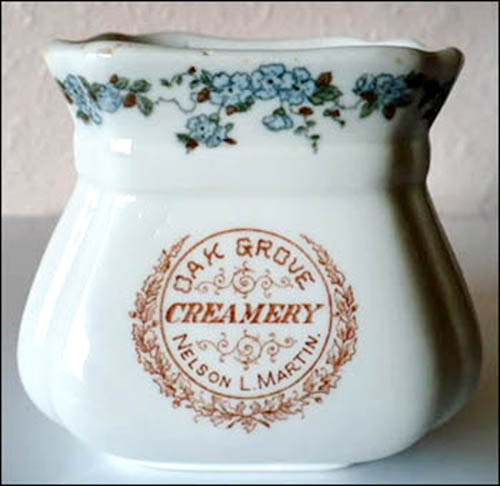 Notes: According to articles about Oak Grove Creamery Co., Vermont native Nelson L. Martin was for some years general manager of the company, but as of April 28, 1894, he purchased the business, including all property at 439 and 445 Boylston Streets in Boston, as well as the milk routes, and creameries at 496 Main Street and 434 Harvard Street in Cambridge. The main office was the company's 445 Boylston Street address.

Oak Grove supplied milk, cream, butter, ice cream and fruit ices via its stores and home delivery and was a dairy lunch company, too. Milk came from Oak Grove Farm in Millis, Mass.

An ad announcing this change in ownership also noted: "To avoid mistakes, please notice that we have no connection with the so-called 'Oak Grove Farm Co.' at 80 Ruggles Street." It is just a guess that this other company might have operated the Oak Grove Cafes.

The open, bag sugar bowl has a spray of delicate blue flowers and green leaves and stems encircling the rim on the outside. Below, on the body of the china is a circular topmark in rust brown. Outside a lined circle is a partial wreath of oak leaves. Inside the circle are the words Oak Grove (over) Creamery (over) Nelson L. Martin. Dingbats separate the three lines of text. In addition to other possibilities, given the similarity of its shape to other backstamped pieces, it is believed that this piece was likely made by either Greenwood or Buffalo China.