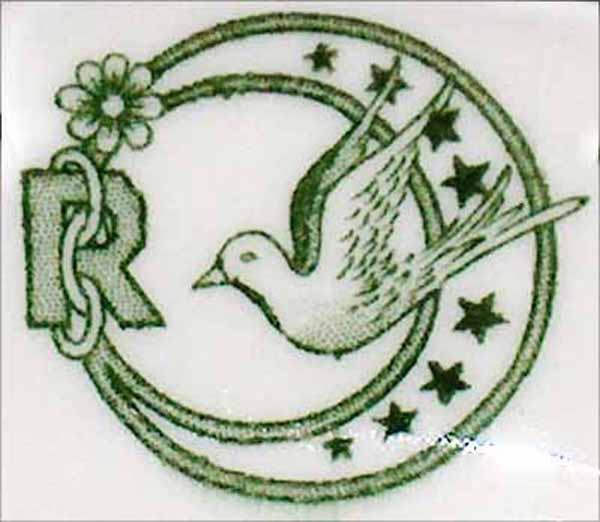 Notes: From the wikipedia: "The Rebekah Lodges were founded in the early 1850s, largely due to the efforts of an Odd Fellow named Schuyler Colfax. Initially, the Rebekah Degree was granted at Odd Fellow Lodges, but by the 1880s, the Rebekahs and Odd Fellows conducted separate lodge activities, as they do today. The Rebekah Lodges get their name from the Biblical character of Rebekah."

(Colfax was vice-president of the United States under Ulysses S. Grant and was speaker of the U.S. House of Representatives from 1862 to 1865.)

The crest represents the Odd Fellows' three chain links symbol intertwined with the letter "R" and a dove, representing peace, inside the letter "D." The circular part of the "D" will often be depicted as a crescent moon.

White plate with border of dark green — or restaurant green — flowers. Crest is a crescent moon, the letter R entertwined with three chain links, a dove and stars.