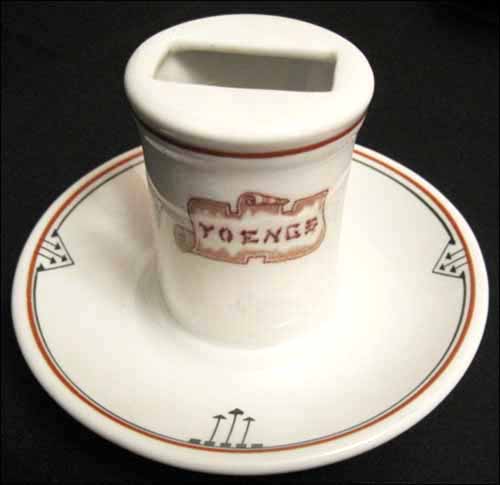 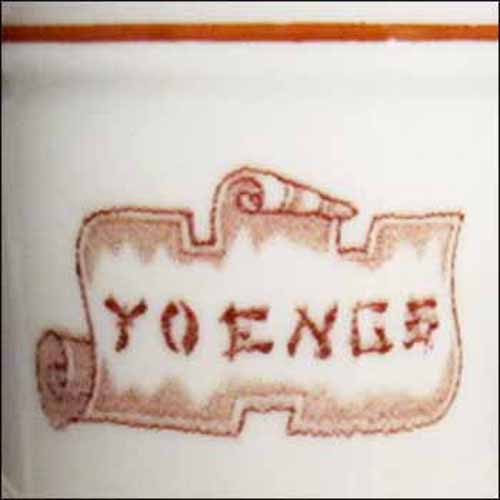 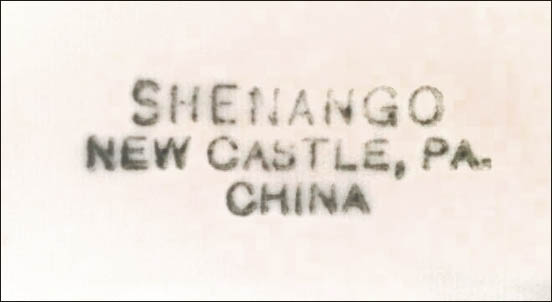 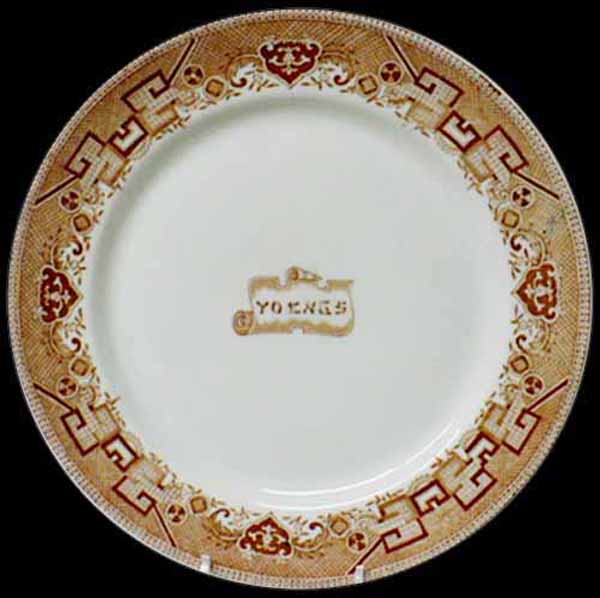 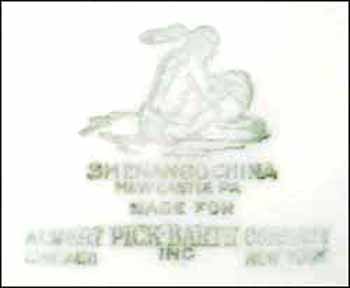 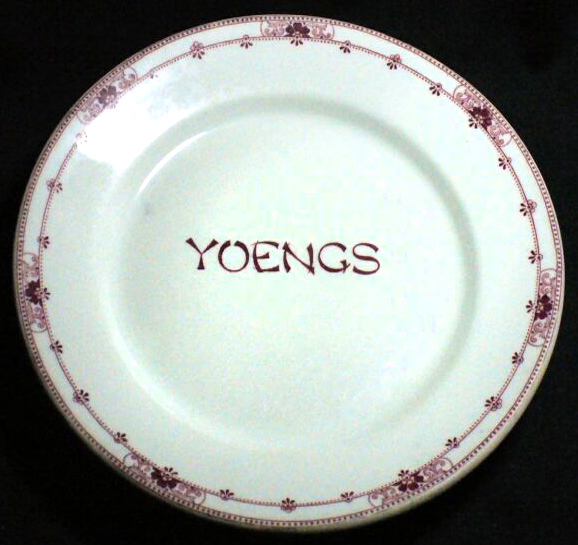 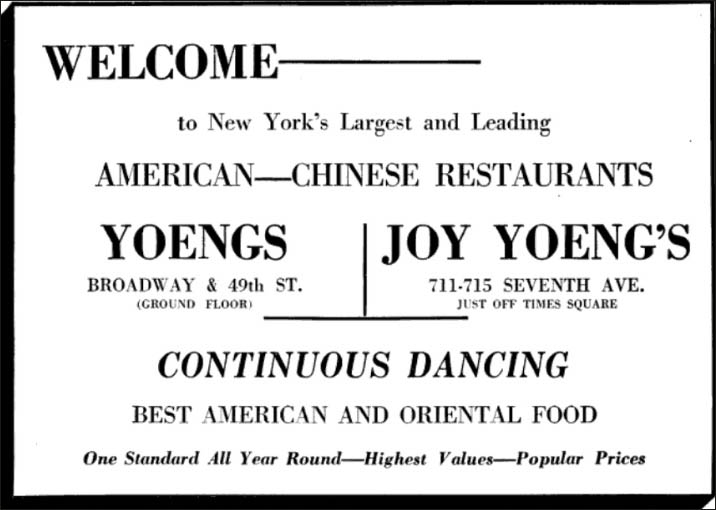 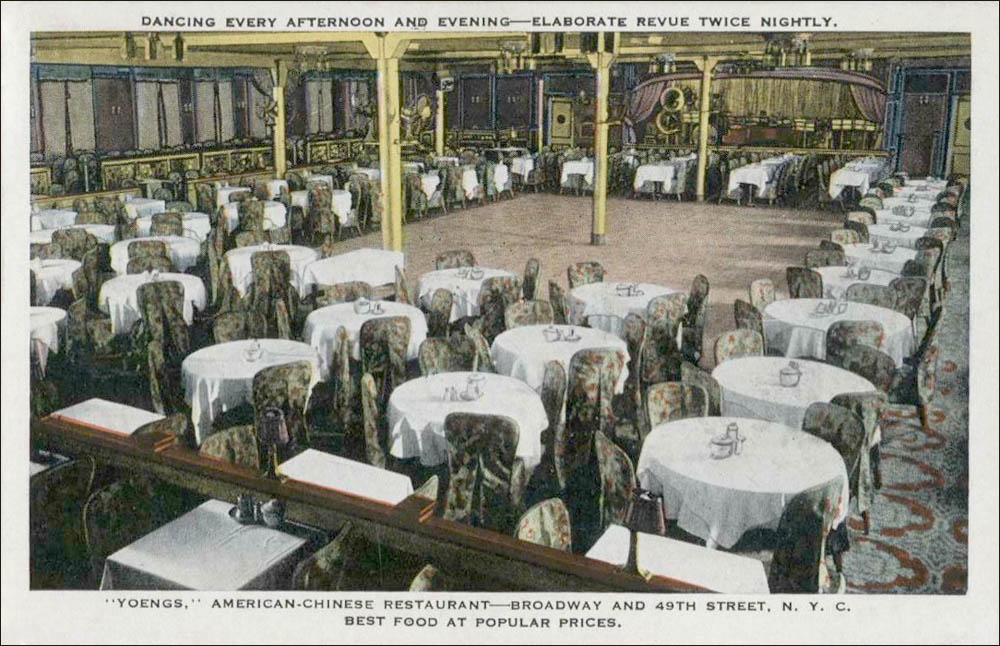 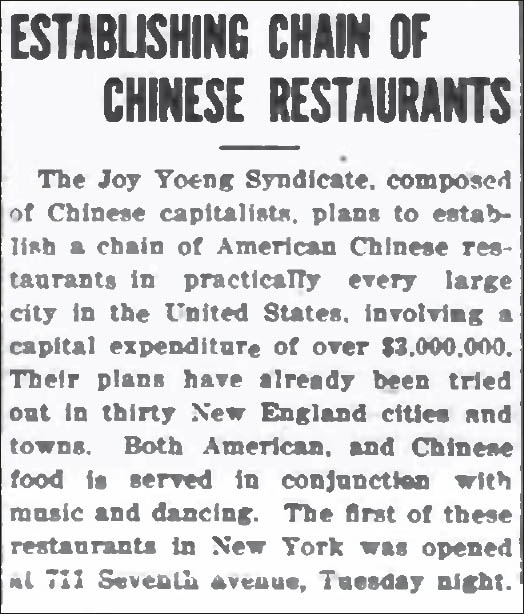 Notes: When attempting to locate where these dishes were used, we tried at first to find specific restaurants. For example, one Yoengs was located at 1609 Broadway (49th Street) in New York City. It was a Chinese-American restaurant that was also a big band orchestra dance venue and sponsor of popular radio shows from the 1920s to at least the early 1930s.

In the book "Those Swinging Years: The Authobiography of Charlie Barnet" (August 1984), he writes: "Like many other Chinese-American restaurants around the city, it [Yoengs] used a band at three sessions – lunch, dinner, and supper. They had bands from four pieces on up and there was dancing at nearly all these places, even at lunchtime when businessmen should come in and dance a little bit, maybe with their secretaries."

And then things got murkier as more and more restaurants were found with names like: Yoengs, Yoeng's, Joy Yoeng's, Toy Yoeng Syndicate of America, and Joy Yoeng Syndicate, many of which had ads with the same font as these dishes we're trying to ID. As a 2008 research paper from Stanford University titled "Celestial Suppers" tells us, there was a "chop suey craze that swept the nation beginning in the early years of the twentieth century." At the forefront driving this seemed to be several so-called syndicates. From the July 5, 1919 "A Journal of Democracy," "The Joy Yoeng Syndicate, composed of Chinese capitalists, plans to establish a chain of American Chinese restaurants in practically every large city in the United States, involving a capital expenditure of over $3,000,000. Their plans have already been tried out in thirty New England cities and towns. Both American and Chinese food is served in conjunction with music and dancing.

An ad from the Democratic National Convention in New York in 1924 (shown above) shows both Yoengs (at Broadway and 49th Street) and Joy Yoeng's (at 711-715 Seventh Avenue)) side-by-side, indicating common ownership. (And yes, that inconsistent use of apostrophes drives us crazy, too.)

In an article about the closing of a restaurant called Churchill's in The New York City Restaurant Archives, it indicates that Churchill's, at Broadway and 46th Street in New York City, closed in 1921 and leased its ground floor to Toy Yoeng Syndicate of America, "which opened a chop suey restaurant in the space."

There was a Yoeng's in Boston (with the apostrophe) that might have been one of the first, at 200 Huntington Avenue, also with a dance band and orchestra that broadcast on the radio. An article in the June 10, 1950, issue of the White Plains, N.Y., Journal News, says its author had lunch with Jimmy Yoeng, who he described as "one of our oldest and probably wealthiest restaurateurs. … Jimmy is the man who 30 years ago came down from New England, found out the famous old Churchill's restaurant was for sale and planked down $43,000 cash for it."

"He got this money not from the horses but from a couple of restaurants he had going for him up in the maple-syrup country, and with it he turned Churchill's into Yoeng's Chinese-American restaurant. For 15 years, you weren't living unless you took your girl to Yoeng's. It seated 1,200 and it featured the most haunting band that ever has haunted Broadway, Paul Tremayne and his 'band from Lonely Acres.'" An ad in the Nov. 13, 1921, issue of the New York Herald, shown above, advertises the location at Broadway and 49th Street as "formerly Churchill's."

And we show three menus above, side-by-side, that make it clear that the Yoengs restaurants at 1607-1609 Broadway in New York City and at 129 Main Street in Hackensack, N.J. were also related to the Boston location, stretching the Yoeng syndicate to at least three states.

These dishes all have their fonts in common, regardless of manufacturer. In today's terms they might be described properly as an attempt on the part of designers to emulate the style of Asian calligraphy brush strokes in an Anglicized font face. All their names seem to be racist. From the Wikipedia, for example: "A wonton font (also known as Chinese, chopstick, chop-suey, or kung fu font, type or lettering) is an ethnic typeface with a visual style expressing "Asianness" or "Chineseness. Styled to mimic the brush strokes used in Chinese characters, wonton fonts are often used to convey a sense of Orientalism. They are frequently viewed as culturally insensitive or offensive."

Shenango plate: white body with a Brown Willow border in hues of orange and rust extending to the verge. The ornamental border design features geometric shapes, as well as large pendants at the 3-6-9 and 12:00 o'clock positions. Topmarked Yoengs in orange on a scroll emblem. Date, based on information provided in Restaurant China Vol. 2, is based on the span between L. Barth's merger with Albert Pick and when L. Barth was eliminated from the distributor's name.

McNicol
Sugar bowls in Carlton pattern in pink with Yoengs in capital letters.

Jackson
Plate has a narrow pink and burgundy stock pattern on rim with Youngs in capital letters in the well.