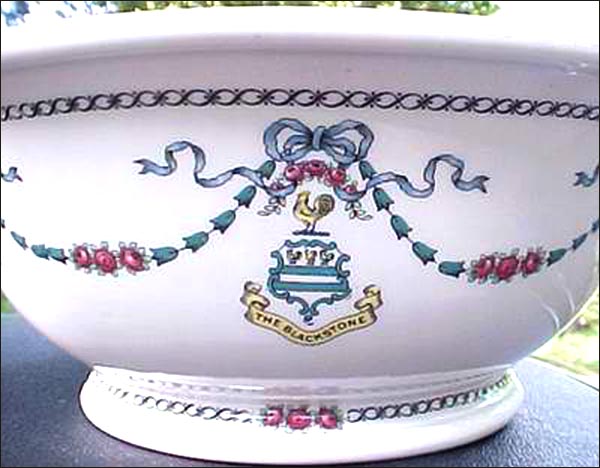 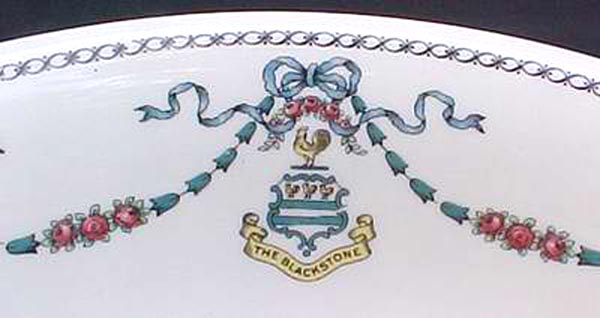 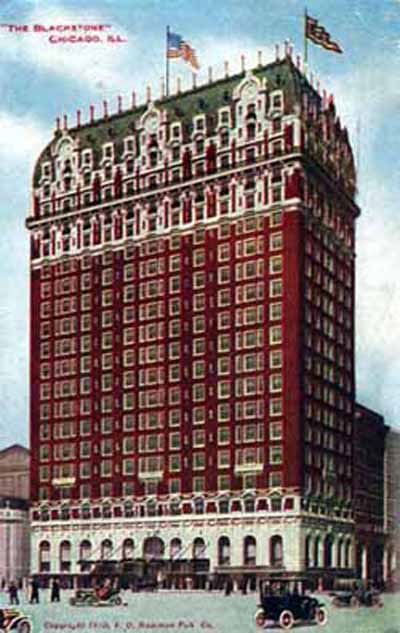 Notes: Located at 636 South Michigan Avenue in Chicago, Illinois, this 21-story, 450-room grand hotel opened its doors in 1910. It was named after Timothy Blackstone, President of the Illinois Central Railroad, who built the hotel mainly to serve passengers of his trains. The original construction was capitalized at $1.5 million, including a $600,000 to $750,000 bond issue by the Drake Hotel Company.

In the 1920s, the Drake Hotel Company undertook some financing arrangements which included extending their debt to construct the Drake Hotel. They used the Blackstone Hotel as collateral for one loan in 1927. The Wall Street Crash of 1929 rippled into the hotel industry, leaving the Chicago Title and Trust Company with 30 Chicago hotels in receivership and causing the Drakes to default in 1932. The hotel ended up belonging to Metropolitan Life, which held the mortgage.

MetLife leased the Blackstone to hotelier Arnold Kirkeby in 1936, and Kirkeby bought the hotel outright in 1941. Kirkeby sold the hotel to Sheraton Hotels in 1954 and it was renamed the Sheraton-Blackstone Hotel. The hotel endured troubles in the late 1960s, as the neighborhood surrounding it declined, and Sheraton finally sold the property to local hotelier Mark Friedman on September 12, 1973, for $5 million and the hotel became the Blackstone Hotel again.

The hotel was added to the National Register of Historic Places on May 8, 1986.

In 1995, the Blackstone was sold to Maharishi Mahesh Yogi.

On May 29, 1998, the Blackstone Hotel was designated as a Chicago Landmark. It is also a historic district contributing property for the Chicago Landmark Historic Michigan Boulevard District.

The hotel closed in 2000 after Occupational Safety and Health Administration building inspectors found safety problems during a 1999 inspection. The building's owner, Heaven on Earth Inns Corp, run by Maharishi Mahesh Yogi, looked into several options before selling the property to Rubloff, Inc., which in 2001 announced plans to convert the building into condominiums priced as high as $8.5 million. Rubloff's plans were unsuccessful due to financing difficulties and a lackluster market for buyers of Blackstone condominiums. The years of neglect following the closing of the hotel took a toll on the building's appearance with both the interior and exterior facade crumbling.

In December 2004, the hotel was sold again, and in 2005, it was announced that the hotel would undergo a $112 million renovation and acquisition in a deal between Marriott International/Renaissance Hotels and Sage Hospitality, a Denver, Colorado-based company. The final cost of the restoration came to $128 million, of which the city of Chicago provided $13.5 million for street-front improvement, including the restoration and recasting of over 10,000 pieces of decorative terra cotta, and federal historical tax credits because the building is a historical landmark. The Chicago Landmark status necessitated renovation oversight by the Commission on Chicago Landmarks.

The newly restored hotel reopened on March 2, 2008, as the Renaissance Blackstone Hotel. The restoration resulted in 332 rooms, 12 suites, and 13,230 square feet of meeting space. The 21-story hotel is now equipped with a health club, a business center, and a street-level cafe with outdoor seating area. Only two guest rooms were preserved during the restoration: the famous ninth-floor "smoke-filled room" and the original tenth-floor presidential suite. They both retained their original floors, fireplaces and structural shapes; however, the Presidential Suite's famed hidden passage behind the fireplace—which allowed the president to exit through the hotel's eastern stairwell unnoticed—has been converted into closet space.

On June 7, 2017, The Blackstone was transferred from Marriott's Renaissance Hotels division to their Autograph Hotels division and returned to its historic name, The Blackstone Hotel. The transition included a renovation to update the look of the hotel with a historic meets contemporary feel by revitalizing the soft good of the guest rooms, meeting spaces and lobby. The hotel also opened a bar in the lobby called Timothy's Hutch, paying homage to the hotel's namesake, Timothy Blackstone. (Source: Wikipedia)

Click here for more Wikipedia information about the history of the Blackstone Hotel.