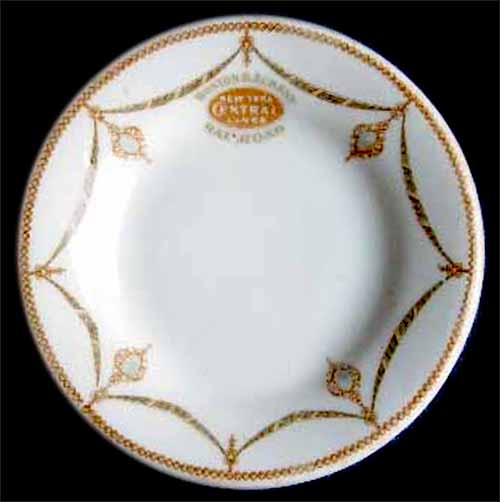 Notes: Railroad collectors identify this pattern as Berkshire as noted in various railroad china books. It was first ordered in 1913. According to Richard Luckin, it was used on the vice president's car until 1918 as well as the regular dining car until 1939. It can also be found without the railroad topmark but with a railroad backstamp.

White body with a beaded border in brown around the rim linked to an inner border of swags and opal-like pendants in shades of green, brown and yellow. Topmarked with a brown circle reading New York Central Lines (which changed to the New York Central System in 1938) with Boston & Albany above and Railroad below in green.

Click here to view the US Patent issued on March 11, 1913 for this pattern design by Elmer E. Walter. It was not a controlled pattern; and therefore, it was available to anyone to use or customize such as the Boston and Albany Railroad.