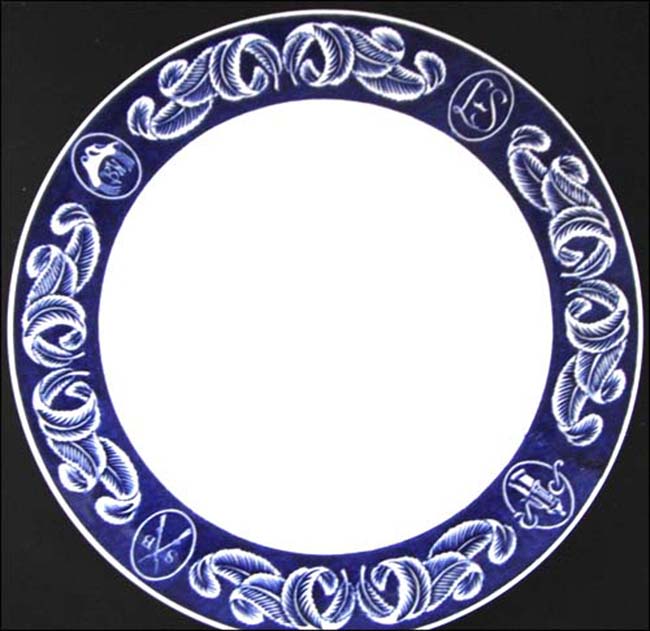 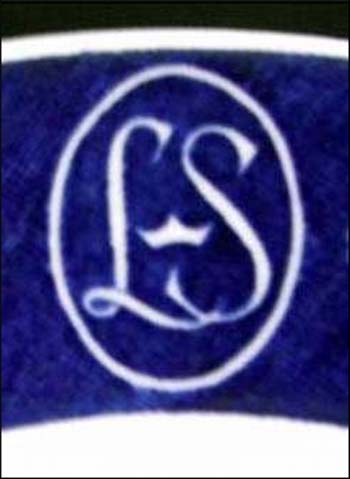 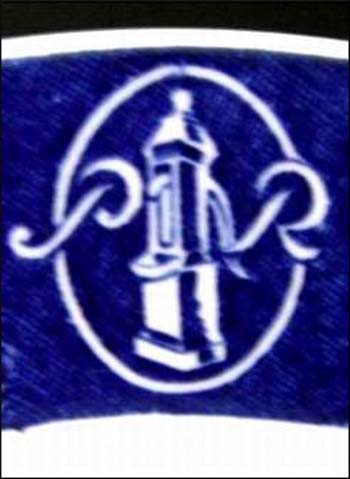 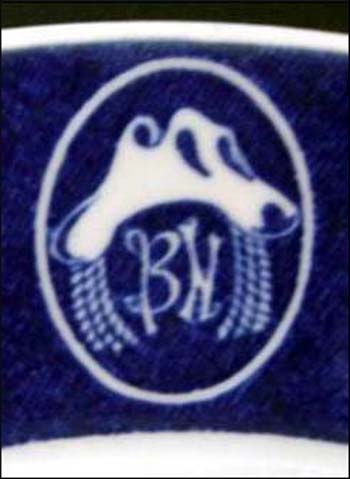 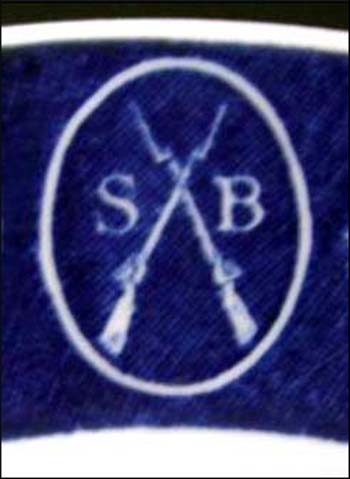 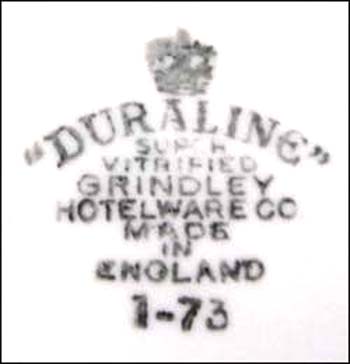 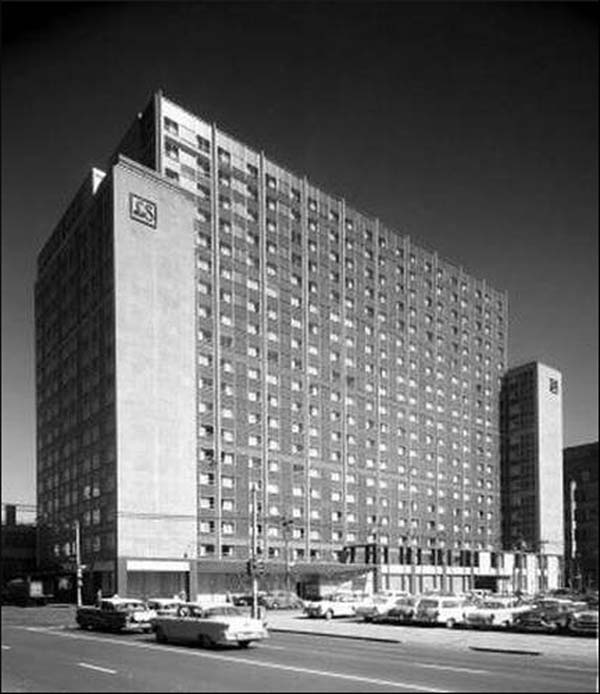 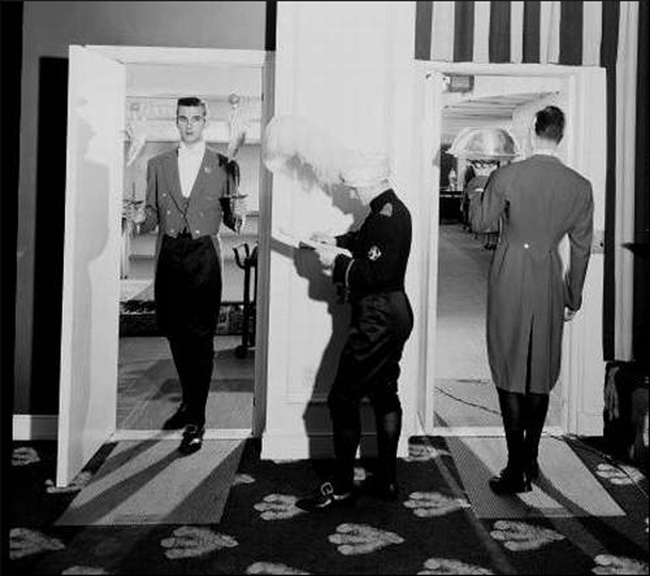 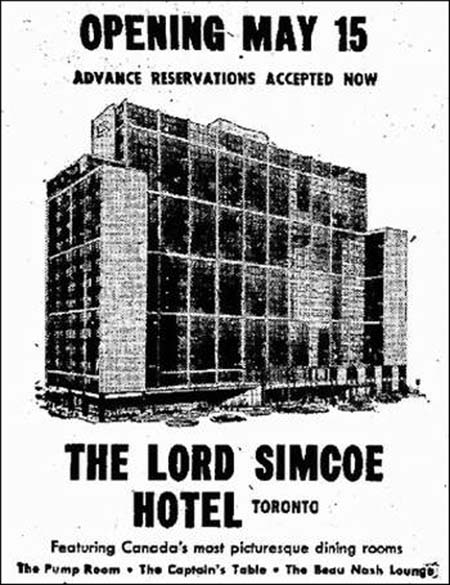 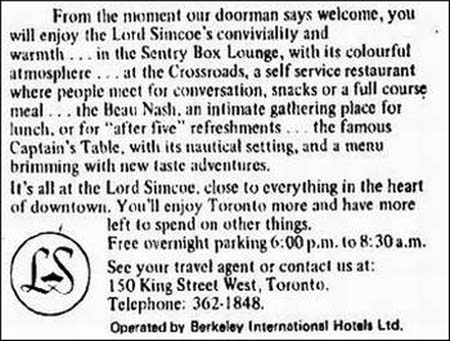 Notes: Constructed in 1956-57, the Lord Simcoe Hotel was located at 150 King St. West and University Avenue in Toronto, Ontario, Canada. The 20-story concrete and glass post-modern building was designed by Henry T. Langston and Peter Dickson. The name of the hotel was a misnomer, as it was named in honor of John Graves Simcoe, who was not a lord, but was the first lieutenant-governor of Upper Canada (the Province of Ontario today). The Hotel Lord Simcoe was owned and operated by a public company, but the stock was closely controlled by the wealthy Webster family of Montreal, Canada.

A Sports Illustrated article dated June 10, 1957, titled "The Footloose Sportsman in Toronto," mentions the new Toronto hotel: "Still abuilding is the Hotel Lord Simcoe, named – there should be no hard feelings – for the head of the British expeditionary forces in the War of 1812. It will have 600 rooms and a replica of The Pump Room in Chicago's Ambassador East, which features meats served on the flaming sword fetched by waiters in tail coats and knee breeches."

The hotel actually opened in May 1957, based on news accounts from the Winnipeg Free Press shown below. Upon opening, the Lord Simcoe Hotel was operated by the National Management, Ltd. of Montreal and was affiliated with the Sherman Hotel and Hotels Ambassador of Chicago, as well as the Lord Elgin Hotel of Ottawa.

The 1965 Wrigley's Hotel Directory listed the Lord Simcoe Hotel with 900 rooms, a cafeteria, restaurant and lounge. The directory also has a half-page hotel advertisement confirming that the Lord Simcoe Hotel was "Affiliated with Albert Pick Hotels-Motels" at that time, but there is no mention of The Pump Room.

By 1974, based on the ad excerpt shown below from the Dunkirk Evening Observer, the Lord Simcoe Hotel was operated by the Berkeley International Hotels, Ltd.

The Lord Simcoe Hotel closed in 1979 and the building was razed in 1981 to make way for the Toronto Stock Exchange Tower completed in 1983.

This Grindley Hotel Ware design was used by the Lord Simcoe Hotel for its replica Pump Room, Beau Nash Lounge and Sentry Box venue (later known as the Sentry Box Bar/Lounge); it is similar in design to this Ambassador Hotels plate by Syracuse China.

Footnote: On Aug. 10, 1956, Patrick H. Hoy, president of the Hotel Sherman and Hotels Ambassador, Chicago announced an equal interest in National Management, Ltd., of Montreal, Canada, along with its president, John C. Udd. At the time, the National Management, Ltd. operated the Lord Elgin Hotel in Ottawa and was building the Lord Simcoe Hotel in Toronto. Similar to the Hotel Ambassador East, the Lord Simcoe Hotel had a replica Pump Room and Beau Nash Lounge.