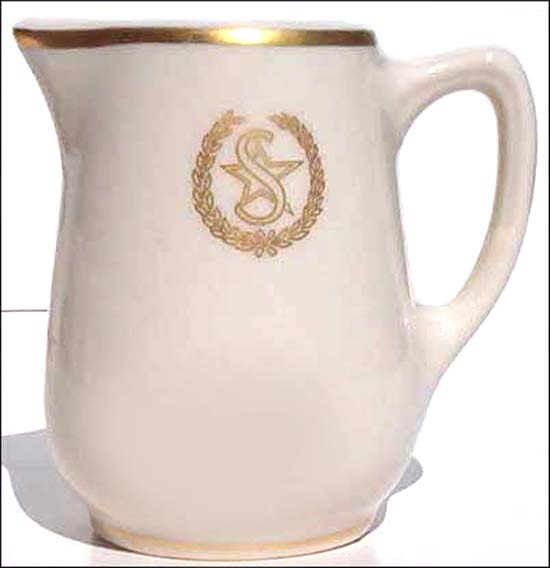 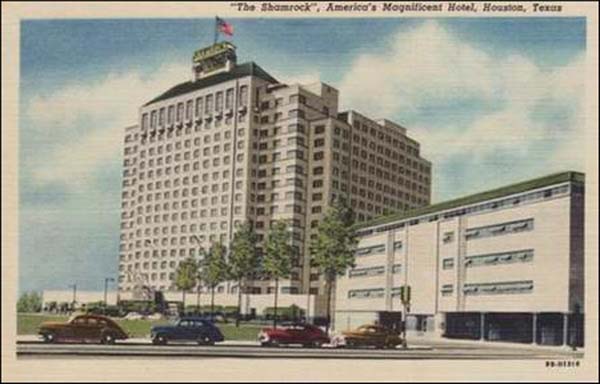 Notes: The hotel was built between 1946 and 1949 by independent oilman Glenn H. McCarthy in Houston, Texas. It was dedicated on St. Patrick's Day in 1949. McCarthy lost the property in 1954 when it was taken over by the Equitable Life Assurance Company and the Shamrock then was acquired by Hilton Hotels. The Shamrock was demolished on March 17, 1987. The hotel was the model for Edna Ferber's Conquistador in her novel "Giant" and was even featured in the 1956 film.

The following information was graciously shared with us by a woman whose parents were part of the original staff of the Shamrock, "where they met — and worked — for many years."

"The white china with the green 'S' was used in the Pine Grill Room. The white and gold pattern (shown below) was used in these rooms: the Continental Room, the Emerald Room and the Shamrock Room. The Emerald Room was a large nightclub with the top acts of the day (Carmen Miranda, Marx Brothers, Edgar Bergen, Jack Benny, Dinah Shore). The Continental Room was a ballroom and would also have shows. The Shamrock Room was smaller."

White body with a gold rim & base line border, topmarked with a gold laurel leaf wreath logo around the script letter "S" superimposed upon a five-point star.