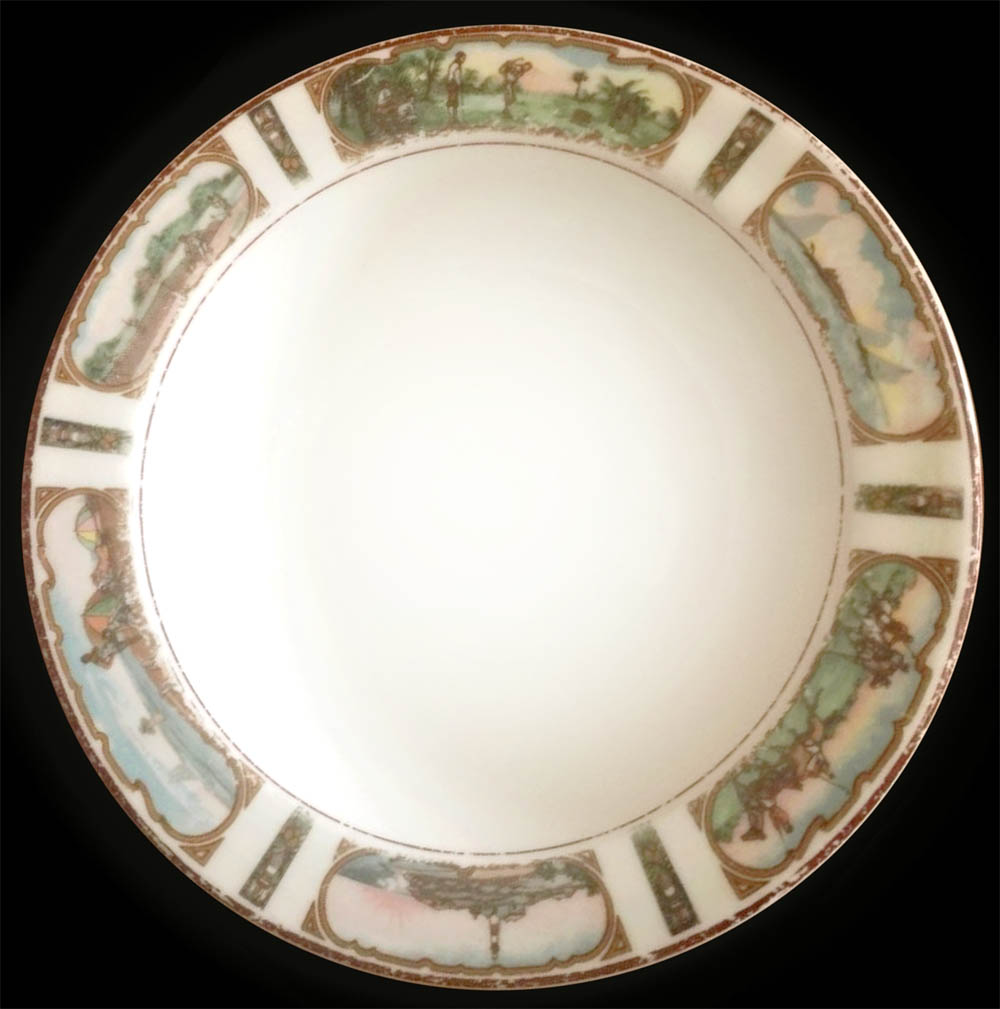 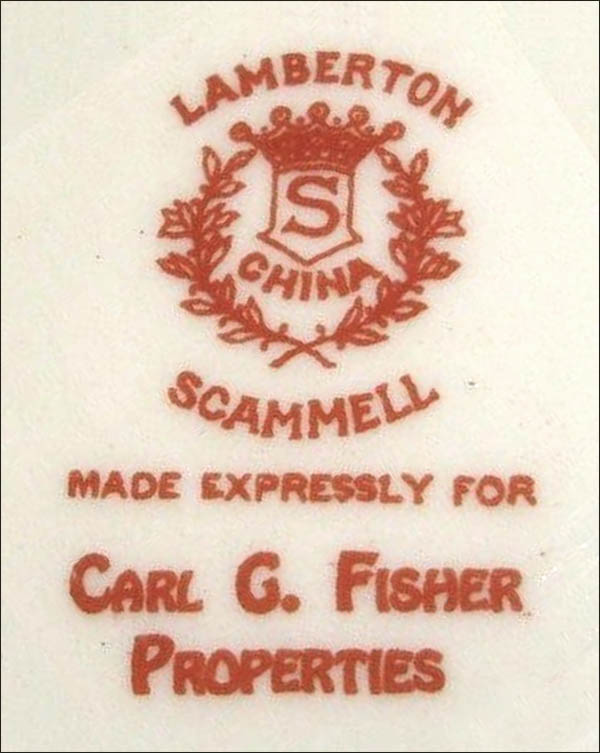 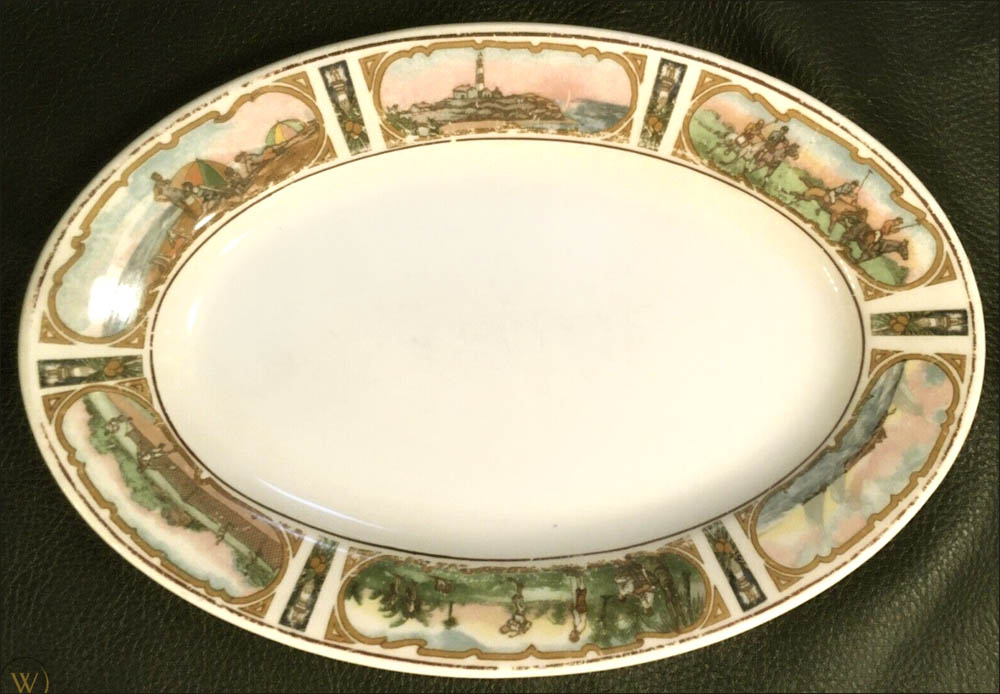 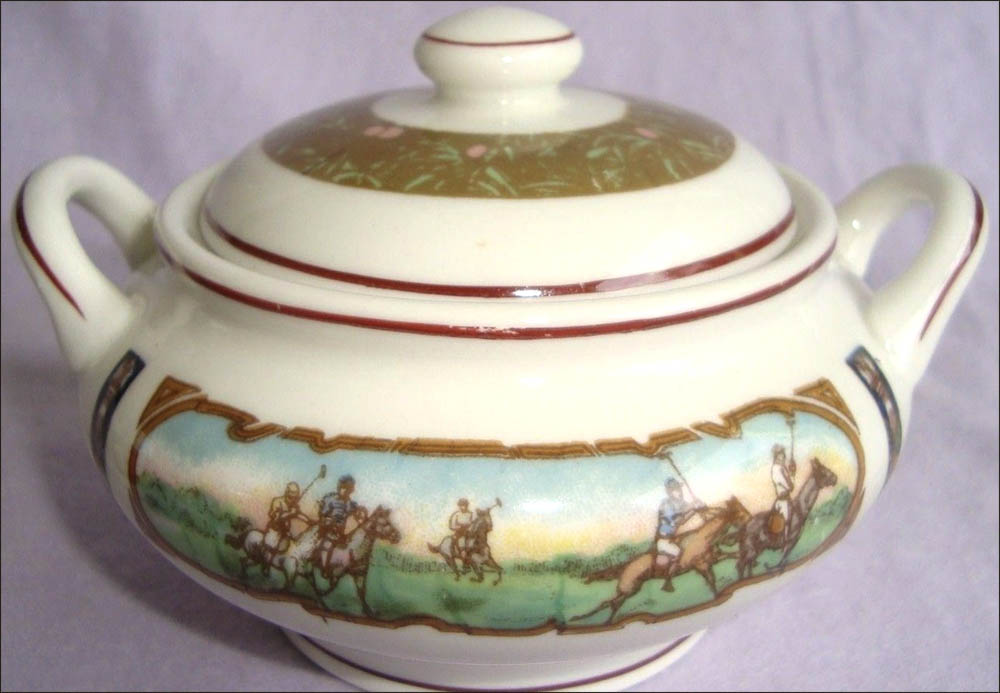 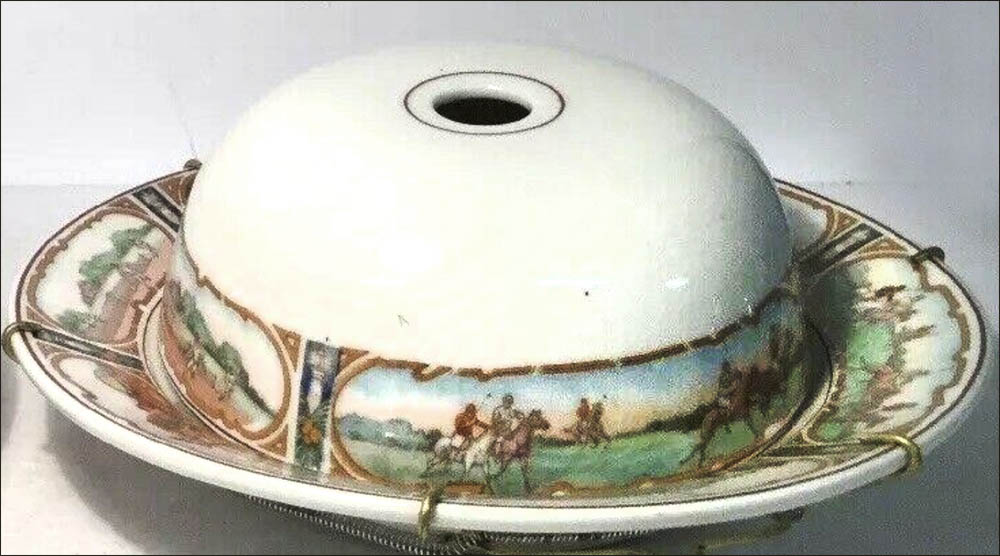 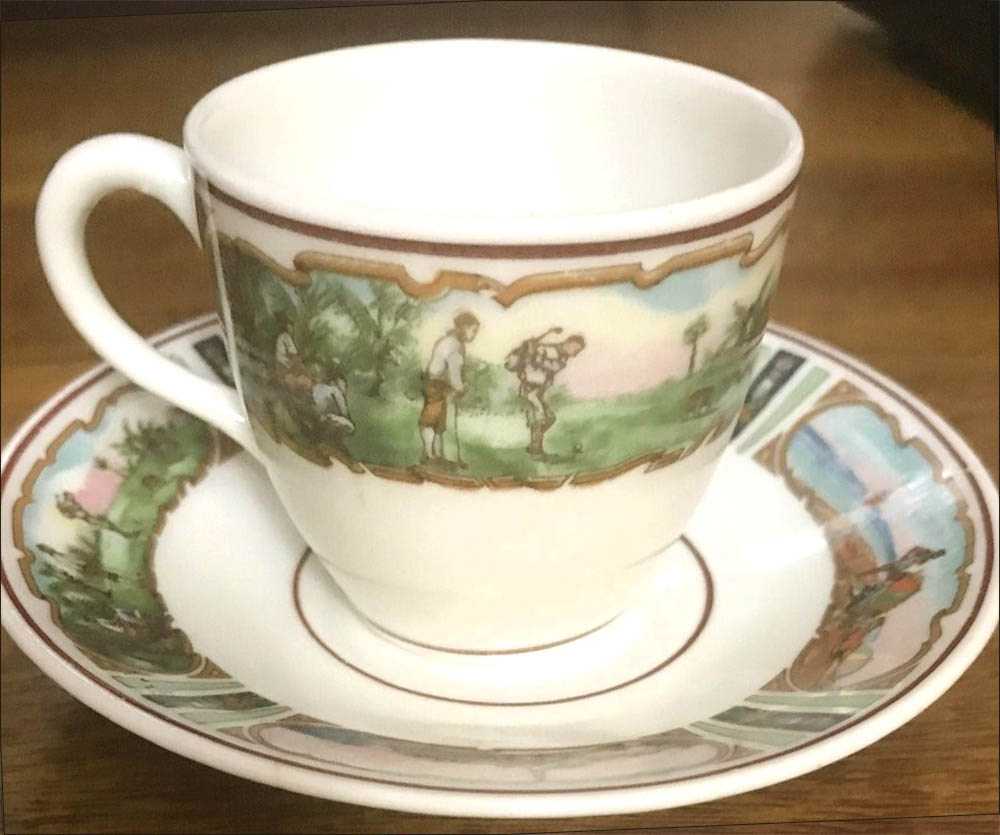 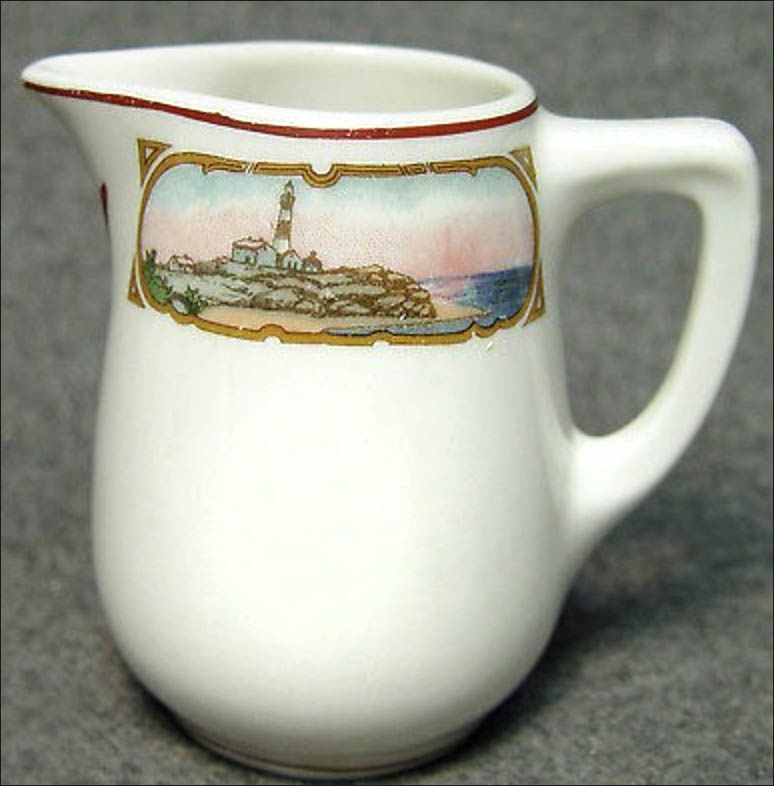 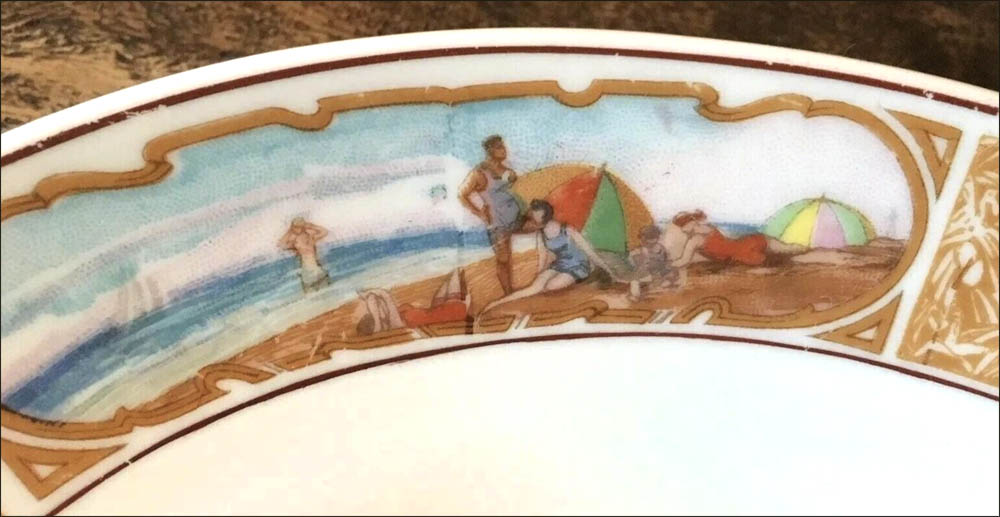 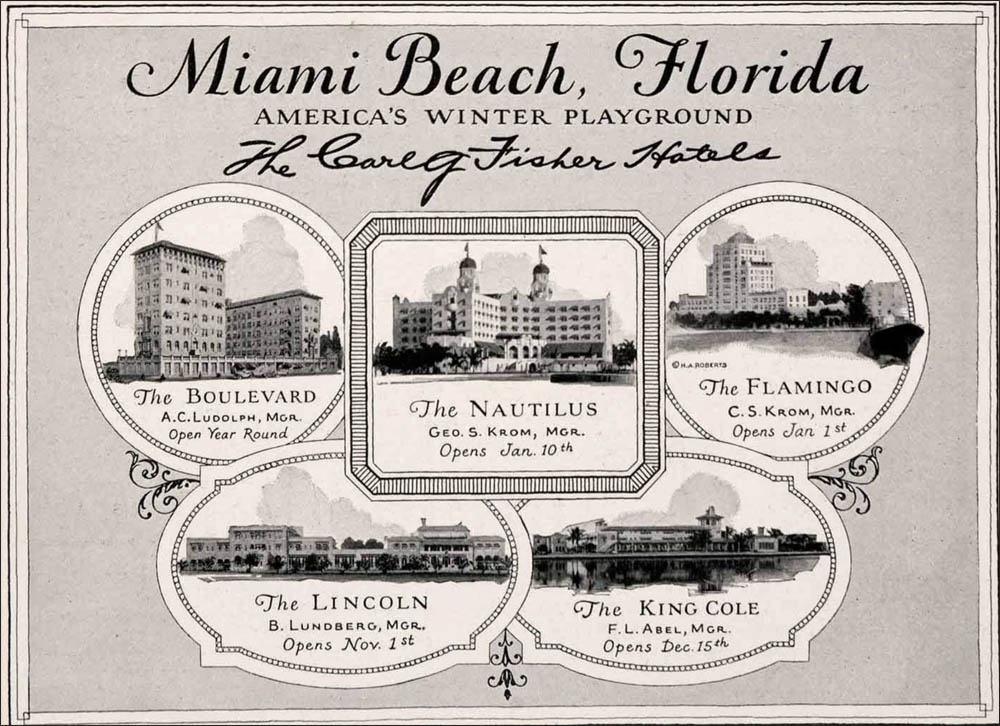 Notes: Carl Graham Fisher (1874 – 1939) is described in Wikipedia as an American entrepreneur who was regarded as a promotional genius.  In 1904, he began manufacturing Acetylene-powered headlights for autos. In 1909, he made millions when he sold his Presto-O-Lite business to Union Carbide. He then became involved in building the Indianapolis Motor Speedway. In 1913, he helped promote the Lincoln Highway, the first road across the USA. Next came the creation of the Dixie Highway, from Michigan to Florida, which opened in 1913. He first visited Miami around 1910 and bought a home there in 1912.

The Lincoln was his first venture into building and owning hotels in Miami Beach. It opened in 1917. The Flamingo followed in 1921. The Nautilus opened in 1924, and The Boulevard and The King Cole in 1925.

As so often happens, however, things did not go as planned. The 1925 real estate land 'bust" in Florida, followed by a hurricane in 1926, and then the stock market crash in 1929, left Carl G. Fisher almost penniless. Montauk Manor and the real estate development around it went into receivership in 1932. Carl G. Fisher died July 15, 1939, at age 65.

The Lincoln was demolished in 1940.

The Flamingo was demolished in 1960.

The Nautilus was used as a military hospital during WWII. It never went back to being a hotel.

The King Cole also served as a military hospital in WWII, then the Miami Heart institute before being torn down in 1965.

Montauk Manor was used by the Navy during WWII. It reopened as an Abbott chain hotel in 1949, was converted to condos in 1970.

The Boulevard operated as a hotel until April 15, 1980, when it closed and was demolished.

During WWII, La Gorce Country Club was turned over to Miami and became a public course until 1953.

Around 1927, Scammell got the contract to produce a china pattern that could be used in all of the Fisher Properties locations. Several of the Fisher-owned hotels had service plates and china services with the individual hotel's crest.  The border design that Scammell's head designer, Emil Schnepf, created is a series of six panels that show the various fun things to do at Fisher Properties. They are: polo, sailing or motor boating, golf, tennis, enjoying a time at the beach, and exploring the lighthouse area at Montauk Point. These panels are multi-color decals that the Scammell decorators may have cut apart so that they could reduce, or increase, the space between the large panels and the small panels between scenes. This would have allowed them to fit the decals to various size plates, bowls, and platters. A different set of straight panels was made for use on cups, sugars, cake covers, and creams. Creating these decals would have been time consuming and expensive for the Lamberton Works, but they expected to see it pay off with the size of the china orders – and reorders. The six hotels owned by Fisher Properties totaled about 1,000 rooms. If all the rooms were filled with two guests in each that would mean 2,000 people were eating at every meal. China was sold in dozen lots, so an order for things like plates would amount to at least 166 dozen.